Les Buis is located to the east of the Autre Monde secteur and west of Chrysanthèmes. From below, its the most obvious large buttress between the towns of Choranche and Pont-en-Royans.

Noted for the moderate classic namesake route; Les Buis was the first long route at Presles.

Secteur des Buis has over 30 routes, mostly in the 6b/c range with by far the most moderate selection the route Les Buis itself. The routes further to the right seem to have some aid climbing with some terrain d'aventure in terms of both the climbing, and the fixed protection (!). Steep routes and great position abound. Routes here range from 6 to 10 pitches in length.

Les Buis, aka boxwood, is an evergreen shrub commonly used as hedges in gardens.

The most convenient place to park is just above the switchbacks at the top of the crag. From that small, shady parking lot, walk back down the road and note the trail cutting down on the left. Follow the trail down and past the west face of the cliff. The big buttress sticking out on the corner of the west and south faces is Les Buis.

To return to the car park from the top of the crag, simply follow climbers' trails to the main track to the north. 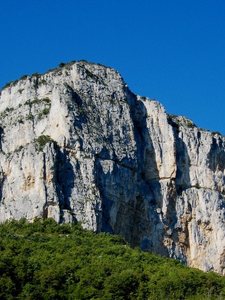 All Photos Within Les Buis