Access Issue: Please no camping at the trailhead (!) Details

Camping at/near the trailhead is prohibited. Drinking water for Richardière and Chichilianne come from this area. Fines are "regular and particularly dissuasive."

Abuse of the no-camping rule could result in not being able to access the parking lot.

Please, no camping near or at the trailhead.

Rising like an impenetrable fortress above the surrounding country side, Mont Aiguille strikes a proud position standing alone off the Vercors plateau.

The birthplace of alpinism? The Affable King of France decreed Mont Inaccessible be climbed and in 1492 (same year Spanish royalty funded some Genoese feller to go on a boat trip), Antoine de Ville and company accomplished the task. The mountain wasnt ascended again until 342 years later. Given the terrain and the day, it does boggle the mind

With nearly 30 routes, 8 to 10 of which are considered classic and/or well travelled, from grades from 3c to fairly hard and frightening, Mont Aiguille has something for nearly every aspiring alpine climber.

The trail approach is sublime, the peak and its climbing routes command great position, and the views from the large flat top are stupendous. A climb of Mont Aiguille makes for a great day. An early start is prudent, especially in peak season.

Note: unless you down climb the standard route (the Voie Normale at a grade of PD), youll need at least two ropes, 45 meters long each, to rappel the standard descent. Given the up traffic on any given day and loose rock, the standard rappel descent is much recommended.

On the approach, if hiking in towards the Northwest aspect of the mountain, look for an area at the base with a cluster of trees rising up on ledges in the middle of the face. Above these trees is the tower of the Gemini (La Tour des Gémeaux). To the right is an open gully. Hidden right of that at the base is where the last 45-60m rappel finishes, which is behind the large tower of the bull (Taurus); tour du Taureau. Above that is the grand coulior des Tubulaires.

On the summit plateau, where the plateau is narrow, locate a large notch or break in the western edge. There is a large cairn (big pile of rocks) and on a short, east facing wall is the bronze plate commemorating the 500 year anniversary of the climb of Mont Aiguille.

If coming from the normal route (voie normale), the cairn and bronze plate will be around 100 meters to the south.
From the short wall with the commemorative plate, there should be a well worn trail heading to the nearest edge (direction south and west). Follow the trail and down climb the slippery chimney below (fairly secure but some folks may want a belay). Note that below the chimney is a large drainage gully; the grand coulior des Tubulaires. Stay in this corridor of rubble and descend by hiking and down climbing where needed. Resist the urge to traverse on any faint trails leading away from the coulior.

Rappel the 30 meters, hike down a short ways until possible to take a faint trail to the north (climbers left) leading around a corner to a large pine tree. From a precipitous ledge, with a few beat up pine trees, a couple sets of anchors are connected by a wire cable. Climb down to the lower anchor (self belay at a minimum very prudent!) and prepare for the final exposed rappel. Rappel for a minimum of 45m, very steep down an initial shear face, which gives way to a wide chimney slot. With two 60m ropes, its possible to avoid the eroded hole (chock stone) at the bottom by just kicking out past the rubble and continuing the rappel.

Follow the climbers trail out of the chimney behind the bulls tower. Take care near the base if there are climbers above (or if its windy: rock fall).

By car, it takes around an hour to get to the most popular trailhead at Richardière from Grenoble (60 kilometers south of Grenoble). Take the A480 out of Grenoble and continue on A51 (toll). Stay on the A51 for around 26 kilometers and at the roundabout, take the second exit onto the D1075 (N 75). After 14 kilometers, take a right on the D7 (dont miss the cheese outlet!), then for 2.5 km and take another right on the D7B for another 2.5 km to Richardière.

To get to the trailhead, go past Richardière around 400 m (past a road on the left) and take the first major road which switchbacks sharply to the right. Either park near here or drive the rougher road up to the parking lot at 1200m (should be an information Kiosk).

Hike the well maintained trail for 3.5km to the Col de lAupet at 1653m. The trail is marked with yellow markers. From the Col, a trail heads straight towards Mont Aiguille. Near the steep west face, the trail braids depending on which route is on the menu.

The main trail will head towards the standard Voie Normal route, and, will tend to be less eroded and better footing. Once at the base, good trails traverse to the other routes.

Please remember there is no camping allowed at the parking area. 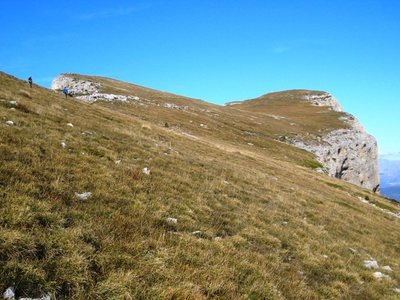 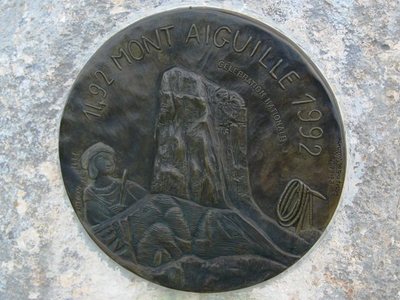 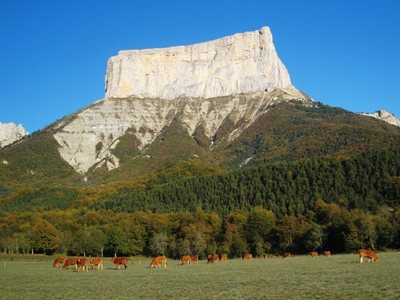 All Photos Within Mont Aiguille