The Vercors is the largest plateau in France. In the French Prealps, its a huge area that is loaded with rock climbing opportunities. The area is also known for sking (both alpine and nordic), hiking, mountain biking, canyoneering, and caving. Oh, and blue cheese! Bleu du Vercors-Sassenage is an A.O.C cheese good on its own, with a baguette or try it on a local pizza (superb).

The Vercors plateau rises up west (and far south to the west) of Grenoble, south of the Isère River, and to the north of Die. Its a natural citadel with sheer, 300 meter limestone cliffs above the valleys.

The largest town on the plateau is Villard-de-Lans, which is a fun town to stroll, bookstore to buy climbing books and maps, guide service, restaurants, pubs, hotels, grocery stores and some nearby camping (and a good tourist office). The main ski areas are also located here.

Other lodging and camping options are spread out both on the plateau, and down below in the bigger towns (Grenoble, Die, Valence, etc). Some of the smaller towns central to nearby climbing on the northern end of the plateau are Presles, Lans-en-Vercors and Saint-Nizier-de-Moucherotte.

There are a number of gites in the area that are comfortable and located near rock climbing. Recommended for a longer (week or more) stay.

The Vercors massif and nearby areas are protected as a regional park: Parc Naturel Régional du Vercors. The plateau has many roadless areas and near wilderness in the Réserve naturelle des Hauts Plateaux du Vercors which is located in the southeast corner of the area.

High and notable summits of the Vercors are:

The easiest way to get around the Vercors is with a car, especially if several destinations are planned. The main access points, depending on the venue of course, are:

 Grenoble: through the Furon gorge (D531 south, direction Lans-en-Vercors or up from Seyssins to Saint-Nizier-de-Moucherotte.

Valence to Romans: take the N532 to the north east to the town of Saint Nazaire en Royans.

Clelles: down the A51 to the N75 from Grenoble, exiting onto the D7 to Richardière (Mont Aiguille)

Vercors can be reached by bus from the three largest surrounding cities, Grenoble, Valence and Die. 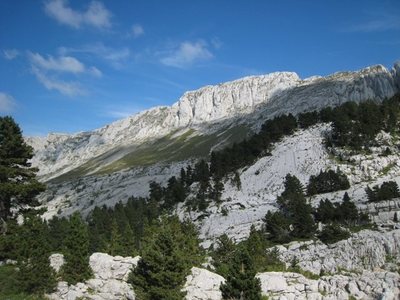 West side of Gerbier 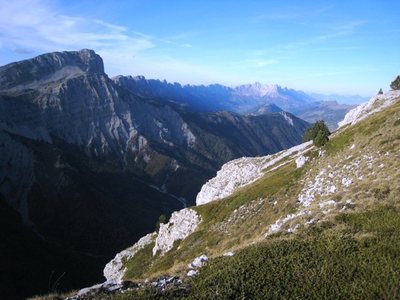 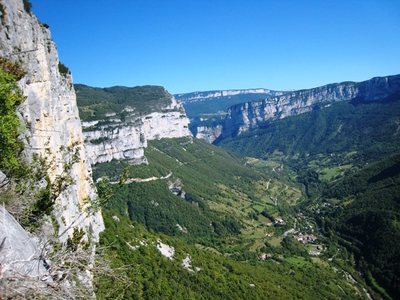 All Photos Within Vercors