Outback Cliff is hidden in the woods up behind Sundown's Main Cliff. Over the years it has developed a somewhat notorious reputation as a mythical, hard-to-find cliff. With a GPS and and/or an advanced sense of cunning, The Outback Cliff isn't really that hard to find, and it's surprising close to the parking lot.

As of August 2012, the cliff looked like it had become reclaimed by the forest. But then again, almost every obscure cliff in New Hampshire tends to look like that in the depth of summer. There are a few worthwhile routes at the cliff, most notably Interzone, Love Crack, and Hyperspace. An inspiring photo George Hurley on Hyperspace appeared in a 1990's edition of Climbing magazine. Perhaps this photo contributed to Hyperspace's popularity, and prompted Jerry Handren, in his new guidebook, to refer to Hyperspace's "oversold" reputation.

The Outback Cliff seems to revel in contradictions: the routes are supposedly great, yet no one climbs them; the approach is short, yet everyone gets lost. I think the best beta is to go there and check it out for yourself...that is, if you can find it.

From the covered bridge, hike past orange gate down logging road for a few minutes to the Nanamackick trail to the right of it. Follow the trail along logging rd. Pass drainage uphill and right, until you come to small cairn on right. Follow this cairn to drainage and cross the drainage.  Follow trail to right of drainage, you should be seeing the occasional cairn. You'll come into a boulder field and bigger cairn will lead to right side of the cliff. 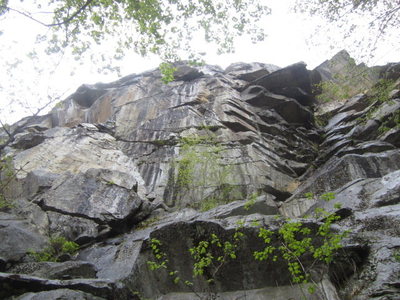 All Photos Within Outback Cliff