Areas in Mocanaqua (aka Shickshinny)

"Mocanaqua" is the general location title that covers several distinct crags and boulder "gardens" scattered in the hills behind the town of Mocanaqua. The specific crag names are Paradise, The Library, Main Wall, Hawk Rock, and Squirrel Rock, along with quite a few others. There is a bunch of great climbing and fortunately most of it has good legal access.

If you're into history, the region's coal mining heritage is in evidence here in the form of great culm banks, abandoned structures, open mine shafts, etc. Paradise, for example was a dumping ground for this mine waste known as "culm" and untold tons of the stuff got poured right over the top. As you approach the cliff from the river, this culm is in evidence the whole way and you can imagine the carts dumping load after load over the top until the cliff almost disappeared. Lucky for us they stopped, leaving a fifty of sixty foot band exposed. The routes here go up to 5.12+ and there bouldering and highballs galore.

Geologically, the rock is quartzite of the Penobscot formation, and (I think) it's pretty cool that it's the same ridge that has exposures in West Virginia (Seneca) and in New York (The Gunks).

As far as climbing history goes, the first person I know of who started developing these cliffs was Albert Pisaneschi and I'm pretty sure that began in the late seventies/early eighties. For some reason Bob D'Antonio is the name that comes up but you can be sure he contributed a fraction of a percent of what Albert did. My guess is Bob talked, Al did not. Albert never reported his own routes, but he was prolific, climbing 5.13 sport, hard trad, ground up first ascents of hard (A4) nail ups, etc. Yet another "unsung" hero of our sport as his friend Rich Romano would like to say.

Some of the climbing areas and trails here are owned by the Earth Conservancy.

Driving from Philadelphia or Lehigh valley or New Jersey or New York City, usually faster to take I-80 West to exit 256, then rt 93 north + west about 3 miles, then turn right on rt 239 North and go 7.5 miles north (with several turns) through Wapwallopen to Mocanaqua. (without using rt 11 or visiting Shickshinny).

The parking is a small dirt lot up a mile give or take on the left immediately off the road before the s turns. The trail is on the right of the little parking lot. The Main Wall cliff parallels the road here and is quite close to the road, but nicely screened by the trees.

Or just use Gordon's directions on Google Maps.

Mountain Project's determination of the classic, most popular, highest rated climbing routes in this area.
More Classic Climbs in Mocanaqua (aka Shickshinny) » 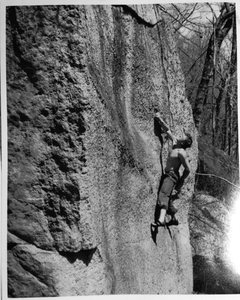 one of many choice blocks in the boulderfield

At the crux of Hickory. 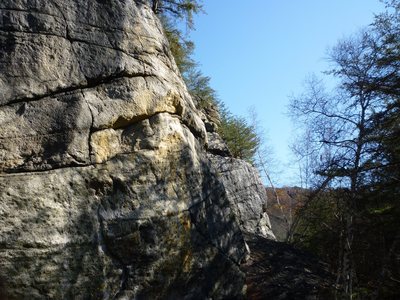 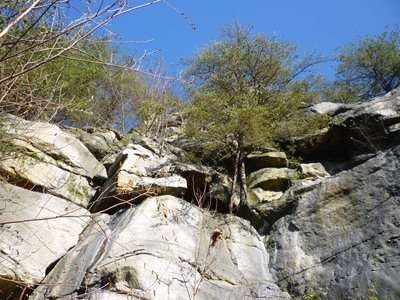 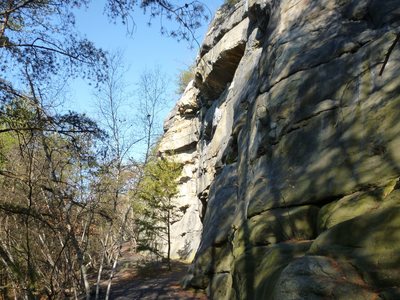 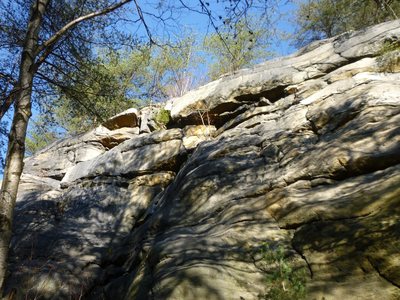 All Photos Within Mocanaqua (aka Shickshinny)


More About Mocanaqua (aka Shickshinny)