Areas in The Waterfall

"It was a kid in a candy store kind of story. Moving to Flagstaff from the San Francisco Bay Area, I just thought all the good rock had been climbed. Putting up routes at the Waterfall freed my mind. It allowed me to go and succeed on routes I otherwise would have never tried to lead at The Forks... All the dangerous ones."

Over the course of some thirty five years, The Oak Creek Canyon Waterfall quietly became one of the most concentrated selections of hard traditional climbing in the country. This broad columnar basalt amphitheater is stacked with splitter cracks and nervy gear protected face climbing. It is a powerful place which commands respect and is considered by many to be world class in the single pitch trad game.

The Waterfall is home to over 140 routes on good to excellent basalt, all within a few minutes stroll of each other. Though there are a few scattered moderates, the climbing here really starts at solid 5.10 and there are 25+ pitches in the grade. Stepping into the 5.11 dreamland often brings thin gear, steep jamming, hard stemming, or otherwise serious cranking. There are 50+ pitches in the grade. The 5.12 climbing at the Waterfall is really special. All the variables which it takes to create good 5.12 trad climbing got fused together here to produce long, unique routes. There are nearly 50 pitches in the grade, many of which are plenty steep enough to log some flight time. On top of all that there is over a dozen ominously thin 5.13 trad lines and the all natural gear line, East Coast Fist Bump, the first pitch here to be given 5.14-. All this adds up to some of the burliest trad climbing in the greater Flagstaff/Sedona area, if not all of Arizona. It’s an onsighters paradise with many of the lines stretching to one hundred feet or more. 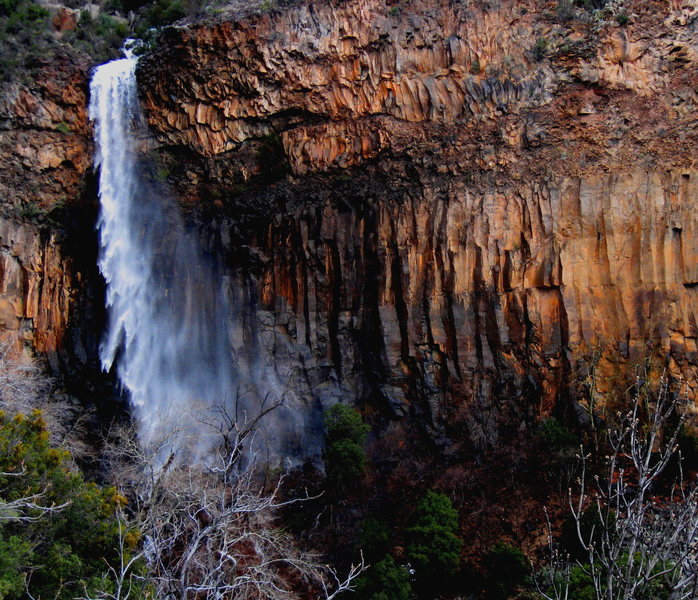 The first known route at The Waterfall was established by local legends Tim Toula and John Gault in 1981, which they named No Feelings. This somewhat psychopathic route still delivers a mental challenge to this day. In 1986 Tim teamed up with the notorious Stan Mish to establish the route Double Clutching which would also sport the first lead bolt at the Waterfall. However, the enormous potential would be overlooked as many of this generation’s best talent spent their time climbing the harder lines at Paradise Forks and bagging summit FA’s in Sedona. 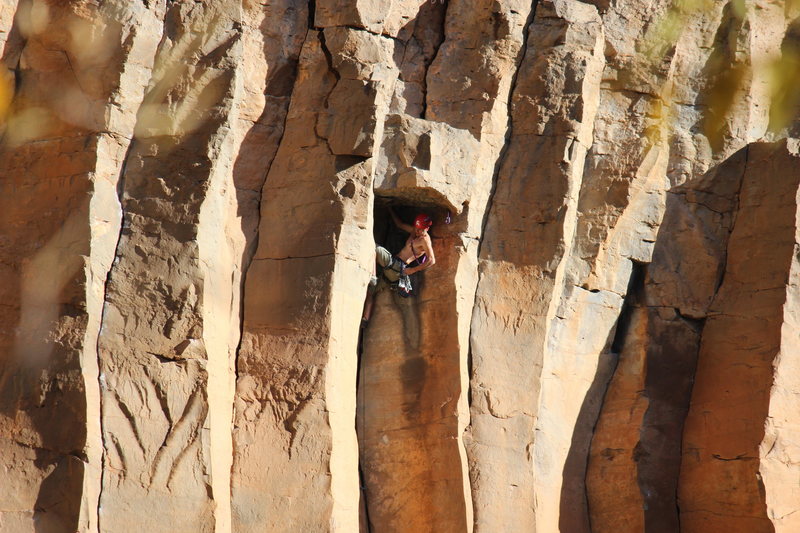 Jmo getting a piece in at the roof on the ever classic No Feelings 5.10+, Right Wall.

In the early nineties a NAU grad student named Darren Singer arrived on the scene and took a good assessment of the place. In the span of just a few years and with the help of Daniel Miller and Jason Keith, they established a good majority of the splitter lines on the Left Wall, as well as, some other well known routes on the Right Wall. It was a productive time with classic crack lines such as Black and Tan 5.10+, Spite and Malice 5.10+, Giardia Crack 5.11+, Locks of Dread 5.12, and The Terminator 5.12 were all opened up for business. 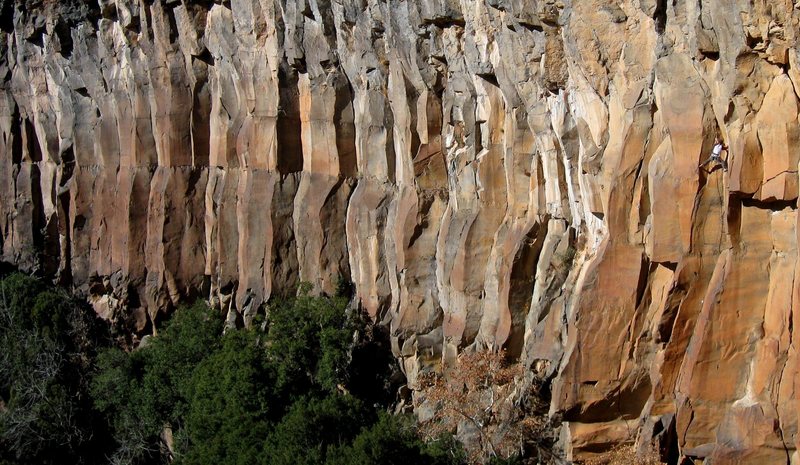 A Most Excellent (5.11+) afternoon with Matt S., and The Left Wall stretching into the distance.

It would be another ten some years before the next flurry of development. In the early 2000’s, Dan Foster, JJ Schlick, and Seth Dyer started looking closer at the undone lines on the Right Wall. They discovered positive edges, perfect solution pockets, and wavering thin cracks that all added up to some serious climbing of a more technical nature. Toe grinding classics such as Soldier Of Fortune 5.11-, Natural Enhancement 5.11, The Harder They Come 5.11+, American Ceasar 5.12, Full Steam Ahead 5.12-, A Wonderful Life 5.12, and Sweet Dreams 5.12 R, and more were all added to a growing list of burly routes.

JJ at the last rest before the top crux of American Ceasar.

Another stretch of years would roll by before JJ, Wade Forrest, and James Q Martin would set their focus on exploring the numerous undone lines in The Main Amphitheater. Fade to Black would be the first route to penetrate the black section of the cliff. After this pitch was completed, it was obvious that any solid feature up this wall would be stellar, and so it was to be. A few of the modern classics include The Darkest Hour 5.11-, Dark Arts 5.11, False Prophet 5.11+, Death And Taxes 5.11+, Could be Worse 5.12-, Fade to Black 5.12, Pressure Drop 5.12+, and There Will Be Blood 5.12+. 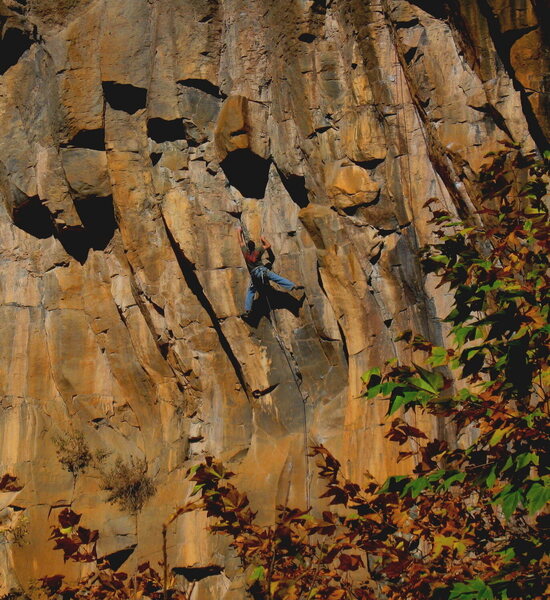 Dan Foster onsighting the second ascent of Death and Taxes, in the middle of The Main Amphitheater.

And the development continued into 2020 with David Bloom, Joel Unema, John Crowley, Ben ZH, and others  uncovered more excellent pitches hidden in the folds of these giant columns. Most of the lines have been done and only a small handful of high end projects remain. Some of the insta-classics to fall in the last decade include Inz and Outz 5.12, In A Blunt 5.12, Wolverine 5.13-, Thin Faith 5.13, The Trident 5.13-, and Joel's test pieces Gemini Dragonfire 5.13+, and East Coast Fist Bump 5.14- which now holds the coveted spot of being Arizona's most difficult, all natural gear trad route. Not to mention it's one in only a handful of natural gear 5.14 trad routes in the country. Amazing hard routes! 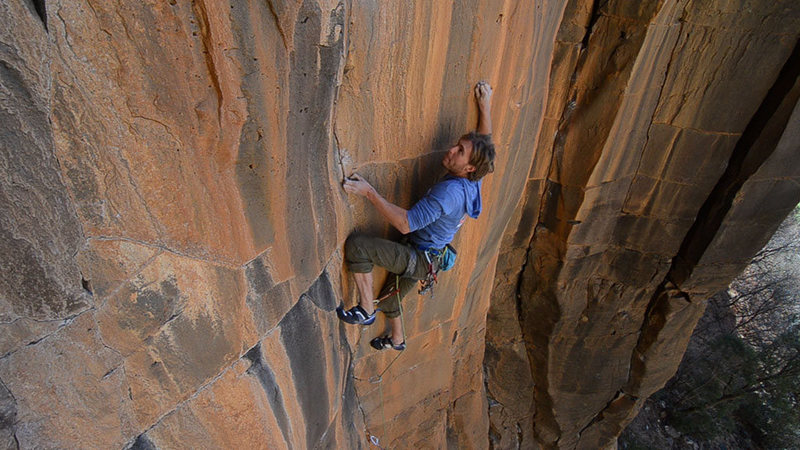 Joel Unema on the FA of Gemini Dragonfire 5.13+, in The Main Amphitheater, at The Waterfall. Blake McCord Photography

Roughly 4-5 miles north of Sedona, on the west side of Hwy 89a is a parking area called Encinoso Picnic Area. Just north of the Encinoso Picnic Area is a small 6 to 8 car pullout on the east side of the highway on a very conspicuous bend in the road. This spot is the usual climbers parking, though it is shared with creek goers, fishermen, and general tourists. Be considerate when parking and taking up space. Google Earth Parking

Edit: The original parking spot is no longer usable as it now has guardrails along the road. Park at Encinoso Day Use Area and hop the rail to reach the creek. Unfortunately it sounds like the guardrails are here to stay.

From the original parking pullout the crag can be seen up high on the eastern side of Oak Creek Canyon. Clamber down through a well traveled notch in the cliff band to the creek. Boulder hop across the creek, then hike 30 seconds up stream on the east side of the creek, past a short smooth sandstone wall. When the wall ends start looking for traveled paths through the shrubbery.

There may be cairns, maybe not. Climb up well traveled tree roots and death blocks to gain the drainage proper. Hike up basalt boulders and after about 4-5 minutes there will be a very isolated sandstone bench. This is a nice place to stretch the legs. After this bench, stay in the main drainage navigating various obstacles until you are face to face with The Main Amphitheater. You will only get a few glimpses of the crag during the approach. 30-45 minutes. Google Earth Main Amphitheater.

The drainage on the hike up can see pretty dramatic changes season to season. High water conditions can make it a challenge to cross the creek, and you may even find it unpassable at times, especially in early spring. 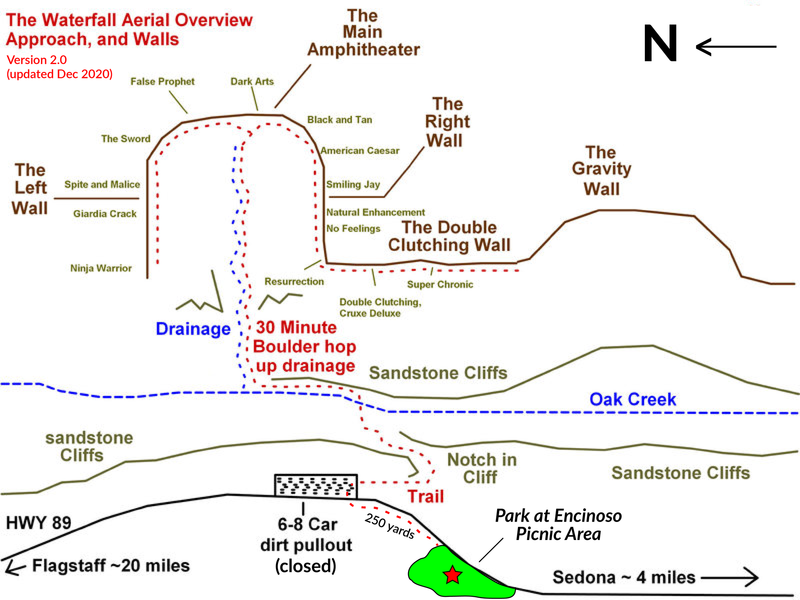 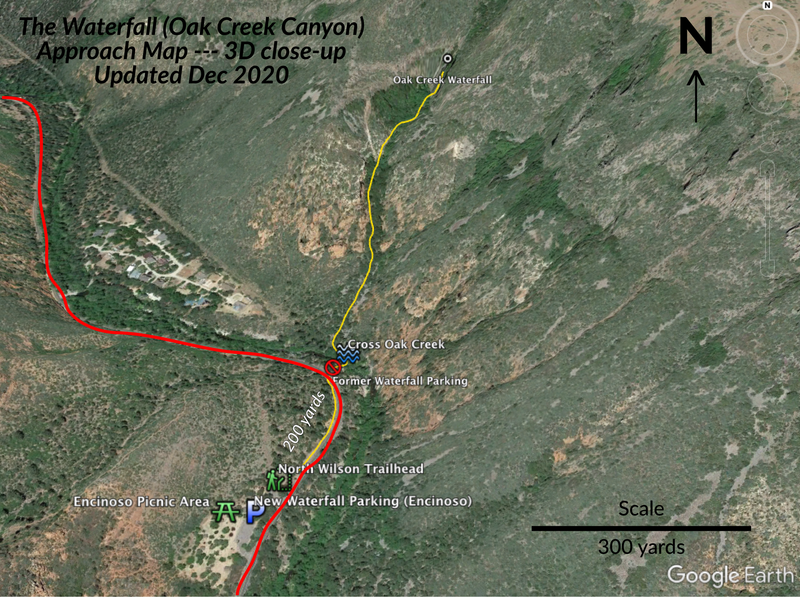 The layout presented here is a streamlined version, and a more in depth breakdown is given in the guide Sedona Rocks, Bloom and Wolfe. The area is essentially one huge and continuous amphitheater and only sectioned by unique features. The approach deposits you in the middle of the Main Amphitheater. The Left Wall (which includes the Tombstone Area, The Pinnacle Area, and The Sword Area) is on the climber's left as you face the falls and faces east. The Right Wall is on the climber's right and faces west. To get to the Double Clutching Wall walk two minutes down the Right Wall until you round a very conspicuous corner. The Gravity Wall is just a bit past the DCW. Like other crack concentrated areas, once you figure out where a few pitches are, it is relatively easy to locate the others in relation. Making these larger wall designations means that there is an easily identifiable classic route near the “end” of a wall or the “beginning” of another, so you should be able to backtrack from them in order to figure out  where the other routes are if you’re new to the area.

A cool aspect of the area is that each wall has it's own unique flavor of trad climbing.

1.The Left Wall boasts some truly amazing cracks. Be ready with fat racks, masochistic hands/fingers, strong toes, and a sense of adventure! This wall faces East and will get the first of the morning light.

2. The Main Amphitheater- Fall Wall is both intriguing and intimidating with it's bulging crown of steep rock. Many of the routes here are mixed pro, both gear and bolts, which opens up some spectacular terrain. This section faces south but does not get sun until midday because of the rim.

3. The Right Wall is a mostly vertical collection of thinner lines with more technical cruxes. You can expect to find excellent crimps and gas pockets which make otherwise impossibly smooth sections of rock climbable. The harder routes on this wall require thin gear and the ability to place it well while on the run. The Right Wall also has several excellent warmups. This wall faces west so morning shade and afternoon sun.

Unexpected and seemingly random rockfall is a real and present danger at The Waterfall. The yearly freeze thaw cycles take a toll on the choss bands which crown the crag. Winter and early spring will bring about the highest risk of rockfall followed closely by the Monsoon season which brings heavy rainstorms and typically runs from July through early September.

After more than twenty years of observation, I can tell you that The Left Wall has the most random rockfall while the falls in The Main Amphitheater and the middle of The Right Wall shed some very large blocks during super wet conditions. I have personally seen 100’ wide swaths of choss come crashing  down during rainstorms. The Double Clutching Wall is perhaps the safest wall. Bring a helmet and wear it while at the base. In my time here, I’ve had half a dozen really close calls with random rockfall while belaying or just standing around. Like, really close calls. Always remain vigilant and pay close attention to any birds that may be nesting above you as they will occasionally knock off rock, as well as, gusty wind conditions.

Classic Climbing Routes at The Waterfall

Mountain Project's determination of the classic, most popular, highest rated climbing routes in this area.
More Classic Climbs in The Waterfall » 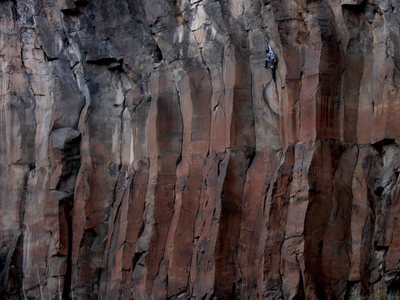 Nick on Spite and Malice. 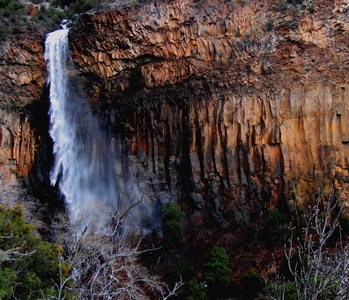 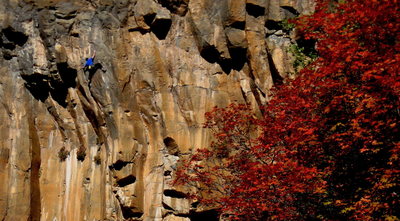 Colin Cox on the 'all or nothing' redpoint crux… 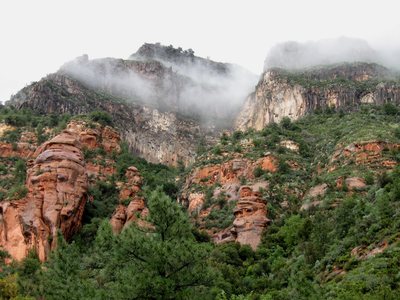 The Waterfall area after a storm. 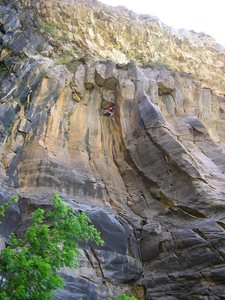 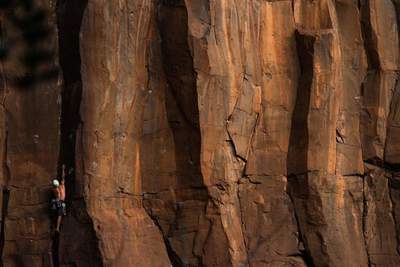 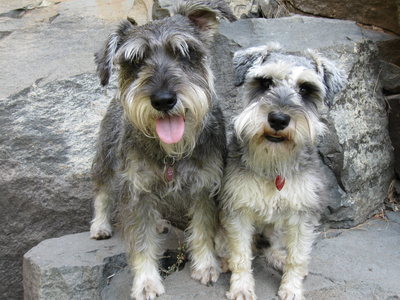 Two of my best partners at the waterfall, Barle… 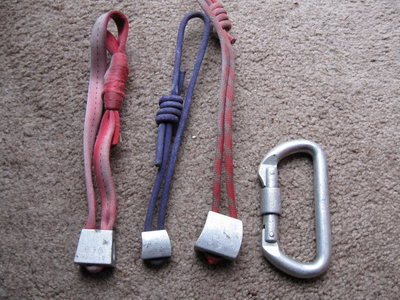 The remains of the old anchor off of Natural En… 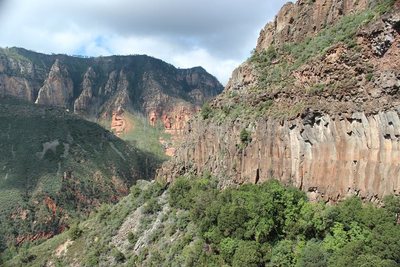 another pretty shot of our little, local eden.... 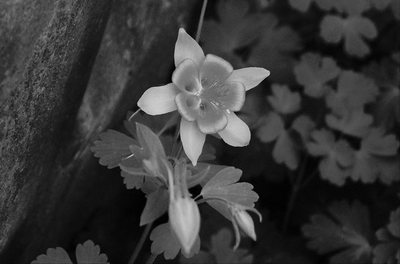 Columbine at the base of Giardia Crack, Left Wa… 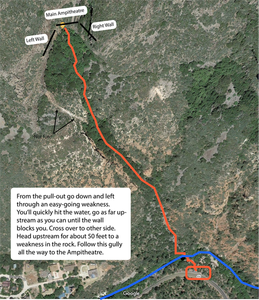 All Photos Within The Waterfall


More About The Waterfall