There are two mixed/bolted climbs on the lower tier of Pajarito Gorge.  Getting to these climbs is complicated, but very much worth it.  These are the tallest climbs at White Rock and they are rad.  It gets shade until late morning during long days.  In the winter, it might be shaded most of the day?

Josh told me he climbed these with Rick Smith over 20 years ago, and that Rick bolted and FA'd them during a dark period of life and was seriously injured while putting them up.  Be careful.

The quickest approach is to rap in.  Go generally straight down from the Main Pajarito Gorge cliff, and find the anchor to rappel in to these routes.

The 2-bolt anchor for Terraflop and Fatal Attraction is straight down the slope from Upper Tier's  Route 12 (which is just right of the nose/buttress).  This anchor is just far enough below the lip that it would be sketchy to get to without being on rappel.  I'd recommend just rapping the Upper Tier with a single-rope fixed line, and keep on going until you find the anchors for these climbs.  The Lower Buttress routes are about 150' tall, so you'll need 2 additional ropes or a pullcord to rap the Lower Buttress if you intend to lead the climbs. 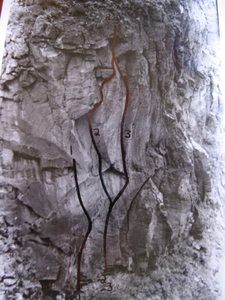 All Photos Within Lower Buttress