This is mostly a south facing basalt crag with trad and sport routes that are exposed and fun. This gets sun most of the day and is subject to winds because of the nature of the location.

Once in White Rock, turn south on Rover and continue slightly past Rover Park and then take a right on Kimberly. Follow Kimberly to the end of the cul-de-sac and park. From the cul-de-sac on Kimberly, walk south to the cliff edge where you'll overlook the gorge and be above the crag. This is not the east-facing cliff that faces the Rio and the tire art (New New Place). The descent is not obvious. The descent is the only place that looks possible on the south-facing cliff. Descend exposed 4th class down blocks and hand cracks about 15'. Then traverse to the east on a 2' ledge around a corner followed by easier scramble downwards. This gets you to most of the rock climbs here. Rappelling is a good choice for beginners, or if you want to bring your pack to the base.

There's a rap anchor to get down to the Western Wall- to reach this, contour around to the south along the rim. 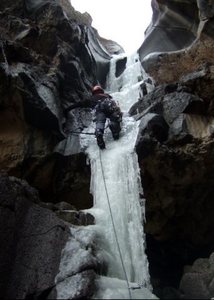 All Photos Within Pajarito Gorge