Todgha (Todra) Gorge offers premier rock climbing with fantastic views and year-round sun, swaying palm trees and a refreshing river to soak your toes — what more could you want?!

The most popular months for climbing are September - November and March - May. However, the gorge can be climbed year-round because there is always a cliff in the sun or the shade. South-facing walls offer hot, sunny climbing even in the middle of the winter, and the centre of the gorge is a refuge against summer heat.

The limestone is compact and very sticky (in fact, the sharpness in some areas will be a good lesson for climbing on your feet rather than your fingertips!). Because the gorges are never crowded, you’ll find few routes require chalk.

There are over 450 bolted routes from 5.5 - 5.13b including a fair number of spectacular multi-pitch climbs reaching beyond 500m. The multi-pitch routes are a combination of rappel or descent by foot. Uniquely, there are beautiful, long climbs even for beginners such as Qui L’eut Cru (5.9). The classic multi-pitch route is La Classique (5.10a) - 9 pitches up a pillar in the centre of the gorge. Approaches are between 0 and 15 minutes.

The first routes were built here by Spanish and French climbers in the 1970s, and new routes are continuously being developed by climbers from across Europe. The fixed anchors are in good condition. It is not necessary to carry any trad gear unless you are specifically choosing to climb trad.

There is one climbing shop located in the area, owned by Aventures Verticales Maroc. This was previously run by a route developer in the area, however the business has now been sold to a local investor. Aventures Verticales still has guides but they are not AMGA certified so buyer beware. As of January 2022 it is unclear if the store sells or rents climbing gear or guidebooks (although please update this if someone visits the shop).

There is a short via Ferrata located at the north end of the gorges, built in 2008. It is the first (and only) via Ferrata in Africa. The via Ferrata only takes about 1.5hrs to complete and is of medium difficulty.

It is always a good idea to wear a helmet when climbing in the gorges as there are nomad goat-herders who live on the tops of the cliffs. It’s not unheard of for a goat to knock a rock off the edge (but it is unheard of for the goat to yell “rock!”).

There are 2 main guidebooks for the area, and they don't agree on many points, including names of routes and sectors.

Before Julio sold his business, Aventures Verticales Maroc would offer their guidebook for 250dh and it could be purchased in the shop just outside of the gorge or by emailing the company directly. It appears that you can still purchase this guidebook (updated 2020) from the AVM website; it is unclear if they are selling copies in the shop.

The Oxford Alpine Club's guidebook can be ordered from their site for £12.50. The most recent (3rd) edition is from 2019. This book does not always rely on original names of routes or sectors and sometimes gives different names. The photographs are high quality and the pocket size is useful.

Hassan Mouhajir, a local resident, sells a photocopied hand-drawn guidebook for 250dh. There are gross inaccuracies in this book, however, including a large number of trad routes that don’t actually exist.

A number of guest houses and individuals in the area will propose their own “guidebooks” for sale or rent. Be aware that these guidebooks are simply illegal photocopies of the official Aventures Verticales or Oxford Alpine Club books.

The trip to the Todra Gorge is most commonly completed as a flight to Marrakech and then a bus ride to Tinghir followed by a short taxi ride to the gorge. It’s also possible to fly to Ouarzazate, just 3 hrs from Todra Gorge, from many airports in Europe. Renting a car from any major Moroccan city is also a simple (but less budget-friendly) option.

Bus Ride from Marrakech
Several bus companies operate between Marrakech and Tinerir/Tinghir. Supratour is generally regarded as the “tourist” bus and it leaves from the train station in Marrakech on Avenue Hassan II. There are two Supratoour buses per day: one that leaves at 8:30am and one that leaves at 3pm. The trip takes about eight hours to travel to Tinghir with a couple of stops along the way, usually long enough to use the WC and grab something to eat in a road-side stand. The buses are modern and comfy, but under some conditions, going through the Atlas Mountains is very windy and passengers have been known to take advantage of barf-bags.

There are also a number of other companies with buses that leave at all hours from the central bus station in Marrakech. These buses are generally a little cheaper but generally more crowed -- and you’ll probably be the only tourist aboard. If you arrive in Marrakech in the evening and want to take an over-night bus to the gorges, some of these buses will get you to Tinghir by the morning. None of these buses have information available online--you simply need to show up at the bus station and ask for a bus to Tinghir and one of the many eagerly-waiting ticket-sellers will be quick to write you a ticket.

If you take a Supratour bus, get off the bus in the city of Tinghir, not the bus station at the outskirts of town. From the Supratour bus stop, it's only about a 5 minute walk to the grand taxi rank where you can catch a taxi to Todra. The grand taxi rank is located in a parking lot behind the post office. If you took one of the other buses, you'll be dropped off at the bus station. From there, you'll have to either walk half an hour to the grand taxi rank or take a petite (city) taxi. If you opt for petite taxi, walk out of the bus station to the main road and turn right. Walk about 200 m where you'll see the taxis on the right. Take a taxi into the centre of the city for 4dh (for one seat). Then walk to the grand taxi rank. A seat in a taxi to Todra Gorge from Tinghir costs 7 dh. You’ll have to wait for the rest of the seats to fill up unless you want to purchase the entire taxi (42 dh). If you have a large amount of luggage you may have to purchase two seats.

**If you’re a little confused, it's necessary to clarify that there are two kinds of taxi in Morocco. Petite taxis operate only in the city, whereas grand taxis go between cities.

Driving from Marrakech or Azrou
From Marrakech take the N9 toward Oarzazate (the Hollywood of the Sahara) where you may choose to spend the night, there are many cheap hotels near the main square and often cultural festivities. From Oarzazate (with a full tank of gas and food!), take the N10 North through no-man's-land to Tinerhir. Once in Tinerhir, on the north end of town there is a road number 6902 that goes west and a sign that says "Gorges du Todre." Take this to Za. Sidi-Abdilali where you will see the gorge.

From Azrou, take the N13 south (with food and a full tank!) to its junction with the N10 in Rachidia. There is a nice roadside stand where one may get a nice cold glass of fresh squeezed orange juice for 10 Dirham (ahh). Take the N10 south to Tinerhir and follow above directions.

* "Hotel "Yasmina" and hotel "les roches," that are located inside the gorge, have been closed for the last few years after a very big stone fell on the roof.

In Todgha Gorges (the best place for climbing in Morocco) there is a new guest house very close to the main gorge "A secret garden": ecological, peaceful, and very sunny at the bank of the river and gardens. Each room has its own balcony and hot water is serviced by solar panels. It's a favourite of climbers because it's owned by Julio of Aventures Verticales Maroc who's always happy to give advice for the best routes to climb during your stay. It's also the only place in the gorges for drinking a post-climb beer!!!

Company: Aventures Verticales Maroc: when Julio Soares was the owner of this shop he offered guiding services. Julio has moved away and the shop was sold. While they still offer guiding services the quality/training is unclear so use their services at your own risk.

We stayed at Dar Ayour & loved it! Super friendly, great food, very nice place (450dh/nt with breakfast & dinner & we had leftover for lunch!!). We talked with other climbers that stayed at Etoiles le Gorge for 220dh/nt with breakfast & lunch. Others camped atop Maison d'hôte but not sure their price but am sure it was cheap." - (April 2016) Todd Snyder

Auberge La Vallee is cheap and sufficient and immediately at the start of the gorge. Food is quite good, rooms are clean, and water is always hot. Like most guest houses near the gorge, electricity is only available when they run the generator in the evening/night. In November 2018, prices was 200dh/night including breakfast and dinner. The only downside is you likely will have to wake up the hotel staff to make your breakfast if you want to leave before 9am. 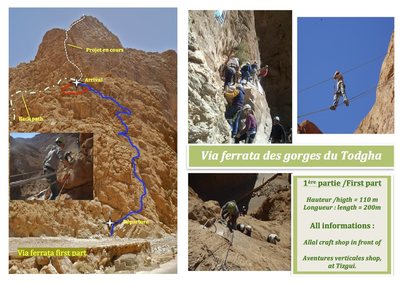 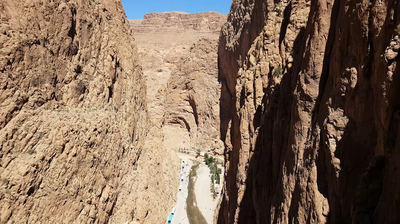 From the heart of the gorge about 100 meters up… 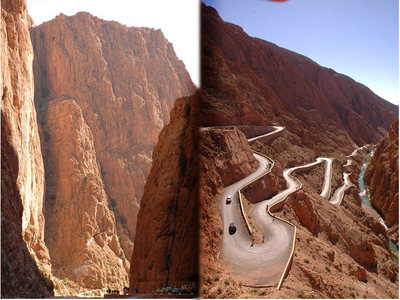 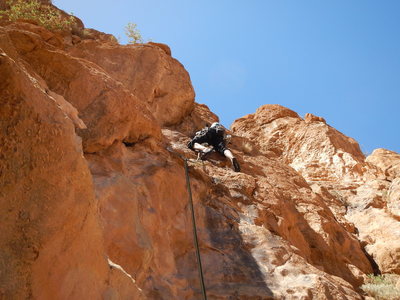 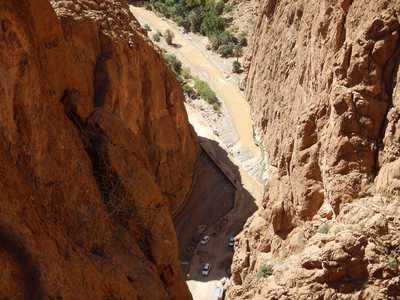 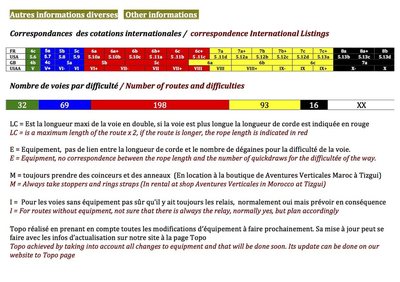 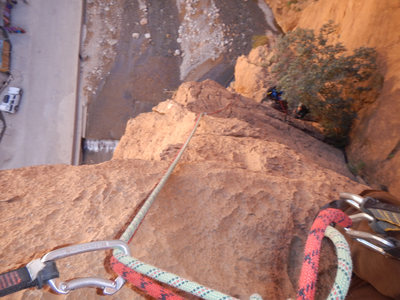 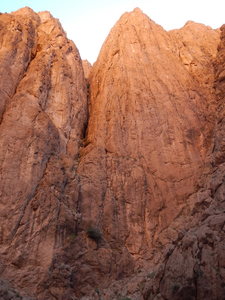 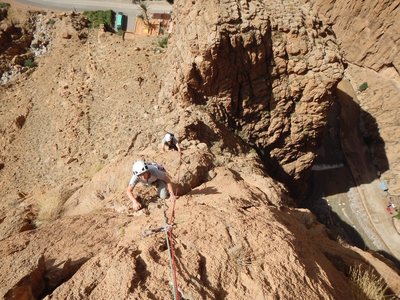 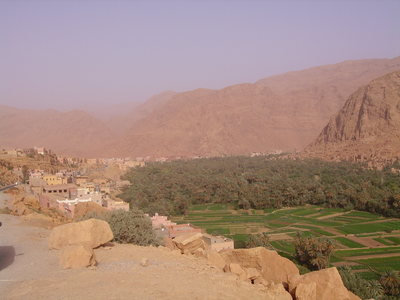 scene outside the gorge 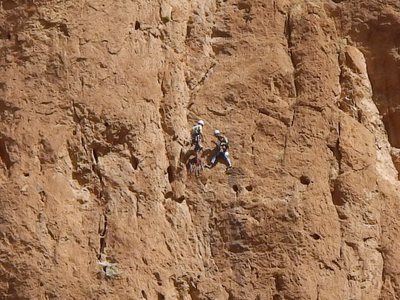 All Photos Within Todra Gorge