Adirondack backcountry climbing crag with routes ranging from 5.3 to 5.12c, and potential for many more. Height averages about 125'. Faces East. Cliff roughly divisible into six parts, from L to R:
1. An isolated buttress (called the Isobuttress) separated from the Black Arches Wall proper by a bottomless, wet tree gully (location of the ice route Crystal Breeze)
2. BAW Left Side (a.k.a the Amphitheatre), composed of several arching corners and a large overhang with a sharply-defined outside corner on its right side (creating the eponymous black arch),
3. The Tripe Buttress, the left side of which holds Gun Show, the front face having Torcher and the eponymous Eatin' Tripe and Lichen It,
4. The Black Arch Buttress area, aka The Patio, a prow of rock jutting out and dividing the BAW in two, home of Black Arch Arête and several crack/chimney lines, including Parallel Passage and Plumb Line,
5. The Low End, the lowest section of cliff, where Critical Crimps and Second Job are,
6. The Right End Buttress, a final, steep, small prow, where several short, hard projects await completion.

~40 minutes: from the trailhead, walk east along the Boulderwoods path, through the Boulderwoods, and follow cairns until one reaches a fern meadow above a large clear-cut area. Slant up the hillside around boulders until the Measles Wall, a heavily pockmarked, low-angle cliff, is sighted. From near the center of the low point of this cliff, a trail runs along and up to a wooded height-of-land near the South Corner Cliffs. Follow this trail along the base of the South Corner Cliffs to where it levels off, crossing an overgrown rockslide area with a "pinnacle" block with a great view partway along it. The path continues through the talus/brush thicket to a short face, where it turns right along the cliff to meet the first climbable rock, the "Isobuttress".
The other sections of the Black Arches Wall are farther along the obvious path.
There are now several anchors for rappel at the "BAW":
One 12' below the top of the Isobuttress; this descent requires 2 rappels using an anchor on a tree at Recuperation Boulevard's belay ledge; an anchor 70' up Adirondack Rehab; or another at the top of E-Stim's first pitch.
In the Amphitheatre, there is an anchor 70' above the start of Broken Broom. This can be used for TRing any of the routes on the main face; directionals are needed for Amphitheatre Crack, Dexter's Dugout, and Impulse Drive.
There is a tree anchor on the top of the cliff, a 60m rope rappel will reach the Broken Broom anchor from it.
There is an anchor at ~100' on Birthday Corner.
There is a 1-bolt anchor at the top of the Tripe Buttress. Class 4 scrambling up the start of Tribulations can reach this.
On the Buttress containing the BAW's namesake route, there is a rappel anchor that requires 70 meter ropes near the top of Black Arch Arête. Note that climbers must rappel from above to reach this anchor, i.e. there is no walk-up access.
There is a rappel anchor above and left of Cranium (by the top of the original route line). Walk-up to this anchor is exposed but possible, so it can be used to TR (directionals needed for PP).
There is a rappel anchor near the top of Plumb Line, well below the top of the cliff (no walk-up access).
There is a rappel station around an oak tree at the top of the cliff near Critical Crimps. This can be used to gain the anchors in the Attic. Note that from the tree, 60 meter ropes will just barely reach the "Patio", the ledge where Plumb Line starts. 70 meter ropes do NOT reach the bottom of the cliff from the oak tree.
Directly below this oak tree, in an alcove under a big roof called the "Attic", is a fixed bolt anchor for rappeling with shorter ropes. 60 meter ropes will barely reach the ground from here. 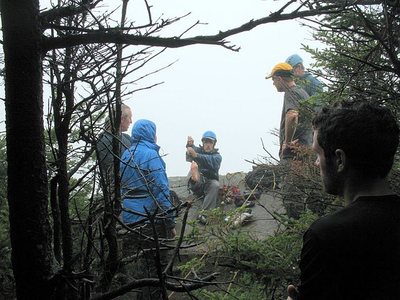 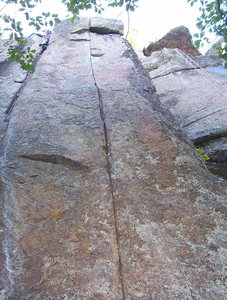 view from the base of plumb line.

All Photos Within Black Arches Wall