This is best known as area of Soylent Green Jeans and Stirling Moss. Although there are several excellent climbs on these cliffs, they have not seen a lot of recent action. A number of bolts and old pitons in the area testify to unrecorded climbing activity over the span of decades. Most of the route names and FA details are lost to the ages, but were probably the work of the usual suspects who were active in the 70s and 80s. Kevin Lowell is also thought to have put up some of the early routes. Most of the routes in this area face to the north and are climbable in warm weather.

The general layout is as follows:

The leftmost section is the alcove with Soylent Green Jeans. This area is just around the corner to the right of the The Case Face. It is easily identifiable by the two large pine trees at the base of the cliffs. There is a rappel station immediately above CU on Top which allows descent with a single rope. A scrambling descent can be made a little further to the left. Just above the vegetated area at the top of Soylent Green Jeans, a highly featured slab leads up 150 feet to the next level. This slab can be used to approach (or descend from) the Cheatstone Crack or the Egg.

To the right of the Hanging Block Buttress, the face becomes taller, and features some areas of good rock mixed in with some heavily moss-covered stone. Above the level of this face, the topography becomes more confused, but good climbing is to be found on the Cheatstone Crack, and historical significance on the Egg.

Descent from the upper levels is probably easiest by scrambling to a rappel from a tree atop the featured slab just above Soylent Green Jeans. From the big ledge at the top of the Hanging Block, you can rappel from either of two bolted stations, one at the top of Coronary Bypass, the other on top of Hundred-Foot Stick Clip.

Drive in on the main Willow Springs road. This road runs northwest until the pavement ends near the main picnic area. Just upstream from the Case Face, a small canyon branches off to the left and leads west beneath some good cliffs. Park in this area and walk across the main wash to enter the small canyon. After just a short distance you can head up the hillside to the base of the wall. A scrambling approach can also be made from the area of the Case Face. 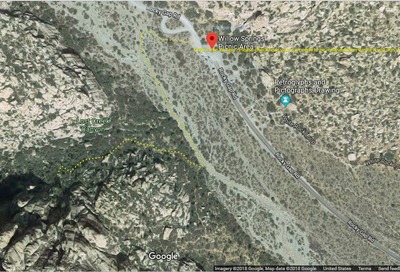 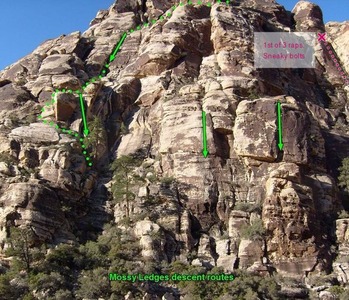 The best way off the top with a 70m rope. 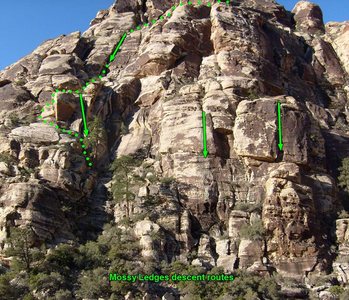 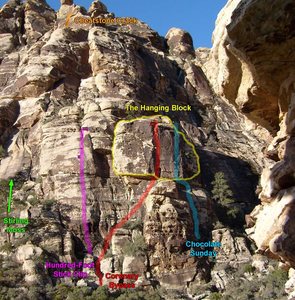 The key features on the right (western) side of… 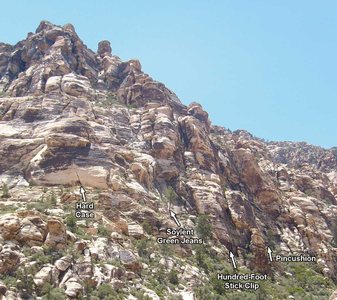 An overview of the main landmarks in the Mossy… 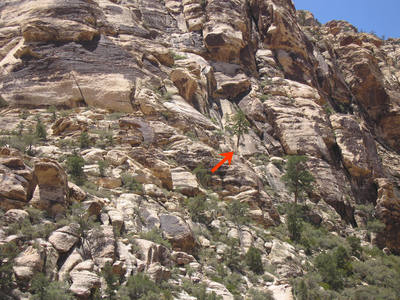 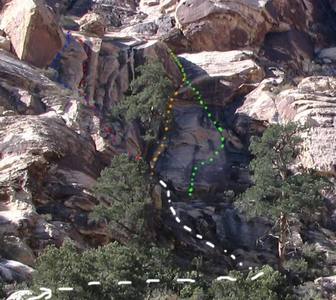 All Photos Within Mossy Ledges Area