Rising From the Plains Rock Climbing

Routes in A. Rising From the Plains

A voluntary closure is in effect at the Main Wall of Wild Iris from June 7 to August 15th, 2021 to protect nesting raptors. Please avoid climbing the following routes: Buffalo Soldier (+Charlie Drew That Spinnin’ Bull), Cowboys Don’t Shoot Straight, Ambush in the Night (+Riata Man), and roof extensions of Cowboy Poetry (12b) and Boy (13a). Raptors will actively defend nesting areas. Disturbance could result in nest abandonment, egg or chick loss, and increase the chance of predation. This is not only a climber safety issue but an important measure to protect nesting raptors. Please report any wildlife conflicts to the Forest Service @ 307-335-2157. Thank you.

Rising From The Plains is the collection of routes on the far left (west) end of the Main Wall. The crag is known for the bulbous low roof on the left end, which features 4 very difficult routes. This area also includes the long short wall to the right of the roof area. There are currently six more routes on this short wall. Most of the routes at Rising are on the harder end of the spectrum, with a number of quality, short 5.13s, including the once classic Paul Piana testpiece "Adi-Goddang-Yos", which takes the direct line out the left side of the large roof (unfortunately a broken hold at the crux has increased the difficulty & reduced the continuity of this line somewhat). There are a number of good 5.12s, and one intimidating BJ Tilden 5.14 ("You Ain't Bill Hickock"), tackling the central roof line. Novices will want to look elsewhere, though there is one 5.11, which is harder than it looks with a difficult section clearing the low bulge.

Though all of the routes here are short, there is a bit of variety in that some feature enormous roof-bulges, while others are more consistently angled, technical crimp fests, like those on the far right end of the wall. The crag faces South so receives sun most of the day. The two routes on the far left will get shade until mid-day, and a pine tree in the middle of the cliff provides shade on part of "Lord Loves A Hangin" for much of the day. Later in the evening "Last Man Standing" and a few routes to the right receive shade.

This is perhaps the most exposed cliff at Wild Iris. Wind is ever-present, and the crag-base forest is not very dense at this end. Be cognizant of approaching storms and the threat of lightning.

This crag may have some potential for new lines. The backside of this cliff faces north, with rock reminiscent of the poorer quality stuff at the OK Corral. Any routes on this side would surely be popular due to the shade, though they would be short. There is also an open project left of Lord Loves A Hangin.

This sectiobn of cliff is at the far left end of the Main Wall. Follow the main track from the parking lot, staying left at the first intersection. When you are even with the left end of the main wall, head right for the obvious white bulge that is rising from the plains, so to speak.

Classic Climbing Routes at Rising From the Plains

Mountain Project's determination of the classic, most popular, highest rated climbing routes in this area.
More Classic Climbs in Rising From the Plains » 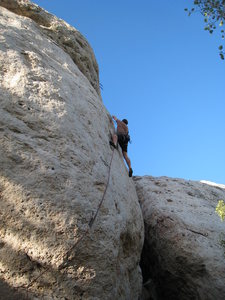 All Photos Within Rising From the Plains


More About Rising From the Plains

Lander Rock Climbs 2018
Steve Bechtel, Kyle Duba, B…
This is with out the best guidebook for the Lander area. The guide is 330 pages of color action s…
About·Free Stickers·Widgets·Help