Western Hills Access Caution: The Western Hills Forest Park Management Office administers the Western Hills as a scenic area. Climbing has been banned at various times by park management authorities, largely for liability reasons. But it has changed from year to year since the mid-2000's, so check locally. As of 2018, routes on north end of the main Western Hills escarpment near the Longmen tourist area are still not accessible. The access trail to the base of the cliff is still blocked by a stupid brick wall and dire warnings of punishment. At least one multi-pitch climb - Once Upon A Year - in the center of the escarpment, to the south of Dragon Gate (Longmen), is still accessible (see topo photo). The lower crags near what used to be Longmen Village, before the super highway was constructed, are partially open. Dove Rock is no longer accessible, but climbing at Owl Rock is now allowed and has seen considerable new route activity in the last couple of years. See new route and access information on the Owl Rock page.

The Western Hills (Xi Shan) are a range of mountains spread across a 40 km-long wedge of parkland on the western side of Dian Lake (Dian Chi). They are also known as the Green Peacock Mountains or the Sleeping Beauty Hills, a reference to their undulating contours, thought to resemble a reclining woman with tresses of hair flowing into the sea. Dian Lake sits in a graben, a structural basin created by subsidence of the earth between two faults. The fault on the western side of the lake created a 4 km-long escarpment of high-angle limestone. The limestone formed as massive, consistent layers with 100 to 300 m-tall cliffs exposed high above the lake. Carved into the northern end of this escarpment is Dragon Gate (Long Men), a group of shrines, tunnels, and stairways that take tourists to an airy lookout halfway up the escarpment. Smaller cliffs are also exposed in various locations on the lower slopes near the shore of Dian Lake.

There are 2 main climbing areas developed in the Western Hills, so far. The biggest is the Western Hills Escarpment itself, which lies about 200 m in elevation above Lake Dian. A second, much smaller area consists of two crags close to the lakeshore near Dragon Gate Village (Long Men Cun).

There are many bouldering traverses beneath roofs at the north end of the Western Hills Escarpment. All are protected from rain and are a good way to finish the summer day when chased off the cliff early by a monsoonal downpour.

Getting to the Western Hills Escarpment and crags around Dragon Gate Village require different routes. See access information for each for these areas. 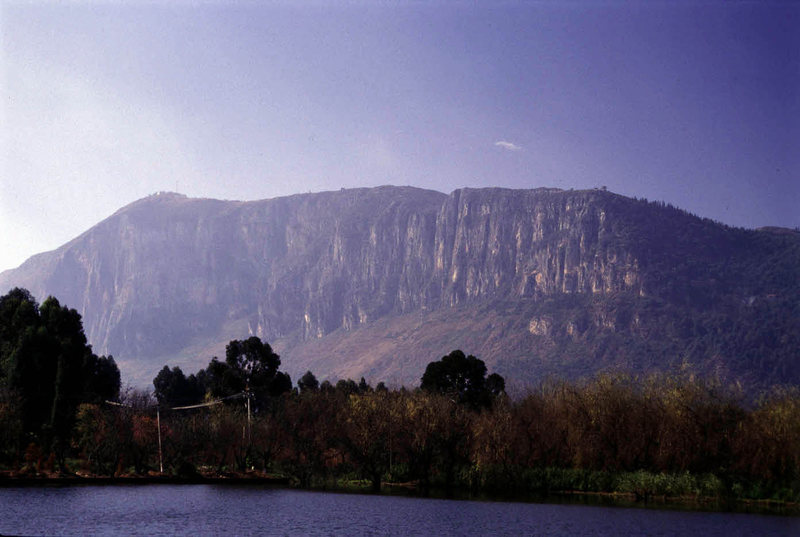