Poster's note: I originally posted this area, and then Tony added the great description below, in the "comments" section. His piece is so much better I asked him if I could move it up here. Nice job, Tony.

The Cordillera Blanca
by Tony Yeary

Some of the best super alpine climbing in the world can be found in the Cordillera Blanca, or commonly referred to as, the Peruvian Andes.
The Blanca is the highest tropical mountain range on earth. The Blanca is a compact range, 180 kilometers long and 20 kilometers wide. It contains no less than 25 peaks reaching 6000 meters and another 35 rising above 5700 meters. Topping the range is Huascaran, 6768 meters or 22,205, the fourth highest peak in the Western Hemisphere. The mountains run roughly northwest to southeast and are bordered on the east by the Amazon Basin and to the west by the Cordillera Negra, a high (14,000) dry range. In between the Negra and the Blanca is the Rio Santa Valley in which lies the town of Huaraz. Huaraz could be called the Chamonix of the Andes. At 10,000 Huaraz is your first step in acclimating and the base for your mountain adventures.
In general the climbing season runs from May through September. This is the dry season and the weather can be very dependable. Several days of clear skies followed be a few days of unsettled weather and repeating until late August, when the weather becomes more unstable with longer period of clouds, rain and /or snow. During the climbing season temps can fluctuate greatly. Night time lows above 5000 meters can be minus 5 to minus 25 degrees Celsius. The valleys can be as warm as 25 degrees Celsius and very nice.
Brad Johnson, author of, Classic Climbs of the Cordillera Blanca, Peru, has likened the Blanca to a cross between the Alps and the Himalaya. It has the easy approaches and none of the crowds of the Alps. Yet the peaks are high, wild, and seemingly remote.
The days of large expeditions and fix ropes are gone. Most of these peaks are aptly suited to small teams climbing in alpine style. Most base camps are no more than two days travel time from Huaraz. Huaraz is a days travel from Lima, and now there are flights to Anta, twenty minutes north of Huaraz for around $90 US one way. Weight restrictions on this flight make this option problematic. Most take the bus, like Cruz del Sur for about $15 US one way. This is an eight hour bus ride that follows the dry desert like coast for four hours before turning east and climbing up to the pass of Concordia. Here you are at about 12,000 and hour or so north is Huaraz at 10,000.
As of March , 2015 the cost is 8 dollars per burro and 16 dollars per arriero - this is daily cost, must also provide food and shelter. THIS MIGHT CHANGE. It's early yet in the year, and the sol is losing value against the dollar

In Huaraz, one will find many outfitters( gear and gas canisters), a grocery stores, open air markets, and hardware stores (white gas). Route conditions and peak info can be found at the Casa de Guias. Lodging and Logistic support will be found in Huaraz as well. There are many to choose from and I can recommend the following:

Additional info can be found in Brad Johnsons book. Classic Climbs of the Cordillera Blanca, Peru perhaps the best single inclusive source for the Blanca in English.

Peru is a third world country with all the associated trials and tribulations. Travel smart, guard your bags, learn some Spanish, and invest a bit of yourself into the folks you come in contact with. Also remember we are guests and as climbers we have a duty to help preserve the resource we are using. This means carry your trash out. Be careful about disposing of human waste. Dont discard your gas canisters ect.. Carry it in-carry it out!

NOTE! As of 2015, the "new" regulations are being enforced irregularly throughout Parque National Huascaran, which includes the Cordillera Blanca.
Be advised it is best to be affiliated with an UIAA recognized alpine club or the equivalent. Showing your membership card goes along way in steering clear of the guide requirements for climbers wishing to operate on their own. Be sure and purchase your park pass and be prepared to show it when entering any of the major Quebrada's.

Easiest (and cheapest) way is by bus from Lima to Huaraz, then get a guide service to drop you at a trailhead. At many trailheads you can find outfitters with donkeys to carry your gear into the hills. 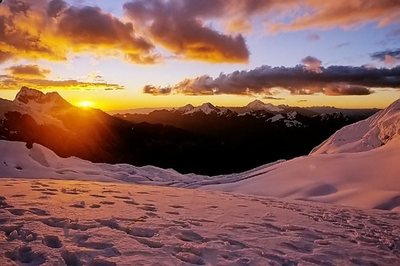 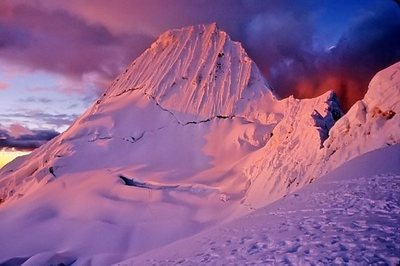 Alpamayo at sunset from col camp. 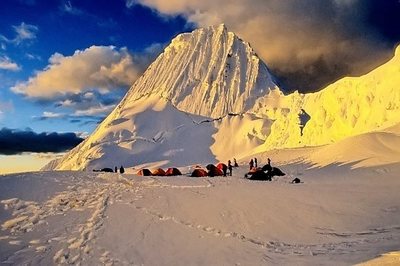 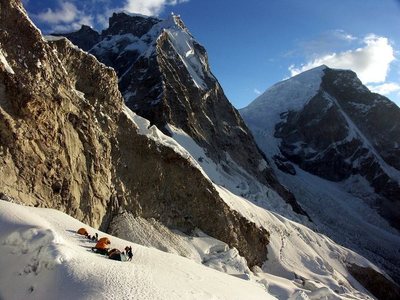 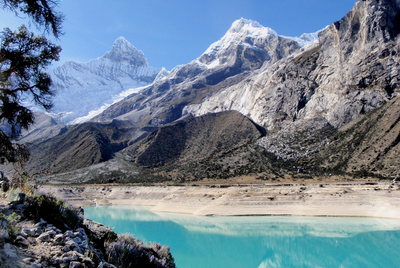 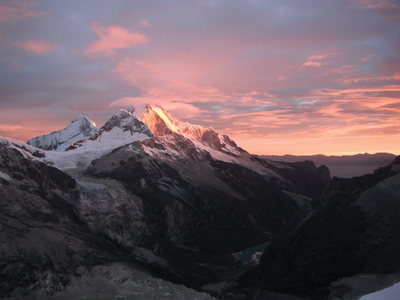 Sunset over the Huandoys from Artesonraju 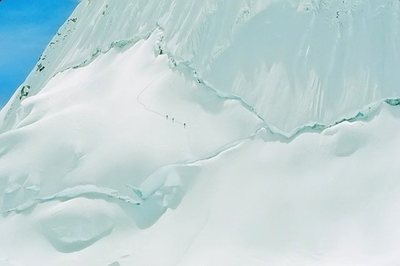 Climbers below the Bergschrund, Ferrari route,… 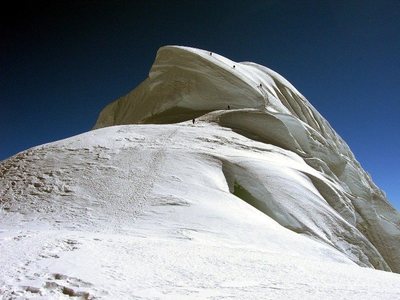 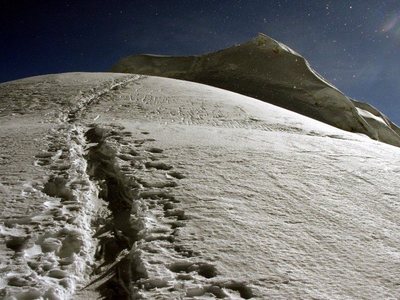 Looking back at the summit of Ishinca. 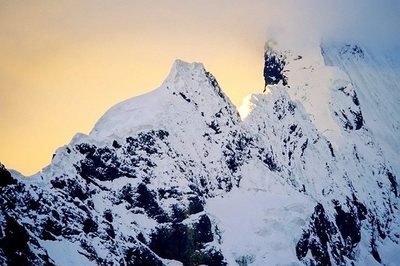 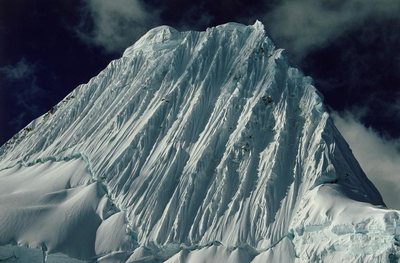 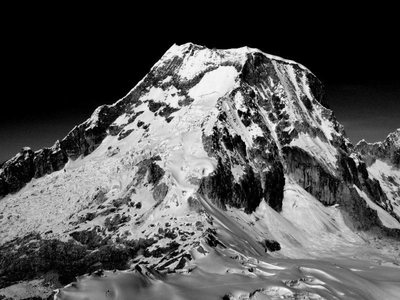 All Photos Within Cordillera Blanca