Fly from any major city.

Many routes/crags in Hong Kong have been subject to a government-led bolt chopping initiative.  Please see the 'updates' tab in the description below for more details.

HK is probably not on most peoples radar screens, even though it has abundant and convenient climbing. There is easy access cragging, and longer multipitch areas. You can be in the city center, or way off the beaten track. Here is a short guide to the Hong Kong climbing scene:

Getting around. You don't need a car in HK. Subway, bus, taxi, and the occasional ferry will get you to the climbing trailheads. Approaches range from ten minutes to over an hour, and are generally steep. Many of the areas have fixed handlines in place for the third class sections of the approach. Some of the handlines are pretty ragged, so look before you yard on them. Other areas, such as Lion Rock or Devils Peak, have concrete stairs and steel handrails. Hiking in HK is popular, but it is neither a wilderness nor LNT experience: On the Lion Rock approach, expect to see paper, plastic and human waste scattered along the trail, and hikers carrying umbrellas, with pocket radios strapped to their belt.

The climbing can be found in four distinct areas. First, Hong Kong island has a number of spots, including downtown (Central Crags) , mid-island (Mount Nicholson and Black Crag), and coastal areas (Cape Collinson and Shek O). Second, Kowloon has several of the most established crags, including Beacon Hill, Lion Rock, and Kowloon Peak. Third, the New Territories have a number of areas, ranging from basalt cracks in Sai Kung to boulder fields in Tsuen Wan. Finally, climbing is found on a number of nearby islands, including Tung Lung, Lantau, and Lamma.

The climbing: Much of Hong Kong is granite, and there is also volcanic tuff, and a bit of basalt. There is a lot of variation across the different crags: for example, there are blocks and corners that have a trad feel, high angle friction, and steep crimpy moves. Generally, you should expect technical face climbing, occasionally very beta intensive. Angles are mostly steep slab to moderately overhung. Routes tend to be short, so you can leave your 70 and 80 meter ropes at home. There is also very little trad climbing, so ditto for tricams and stoppers.

Climbing is popular in Hong Kong, and a day at the crag can be a very social activity: At the busiest areas  Tung Lung and Beacon Hill  you might see ropes hanging on literally almost every route. Routes are clustered closely together; many times, you can reach over and touch a bolt on an adjacent route. So, check with your neighbors before launching off. People are friendly, and you can often snag a toprope or take advantage of some prehung draws if you ask nicely. If crowds aren't your thing, well, you probably shouldn't be in Hong Kong! There are a number of places you can go that are more secluded.

Hong Kong’s first comprehensive guidebook for sport routes was published in late 2020 by Francis Haden.  It has over 1,000 routes, including ten new crags and 200+ new routes.  MP currently describes only a small subset of all sport climbs in HK.  More information about the guide, including sample pages and ordering information, can be found here:

Stuart Millis’ website (www.hongkongclimbing.com) was for many years the only source for local climbing information.  The site has an online guide, .pdf miniguides, and local news.

There are several published guidebooks, although most are out of print. D.C. Reeves published an early guide in 1968 which is of mainly historical interest. A .pdf copy can be downloaded from the guide section of hongkongclimbing.com. Brian Heard's Rock climbs in Hong Kong (1994) was published in the early days of bolted climbing in Hong Kong. For example, One-Eyed Snake at Beacon Hill was described as "Non-existent protection on the crux makes for a very serious lead"; the same route is now well-covered in bolts. If you are looking for obscure trad routes, the Reeves and Heard guides are excellent starting points. Sam Lightners 1994 Exotic Rock guide also featured a short section on Lion Rock and Tung Lung.  Climb China, by Wojton, Thang, and Paulter is a sampler of areas across China. It includes five of the most popular areas in Hong Kong, with color topos, access information, and other details. Finally, Stuart Millis published Hong Kong Bouldering in 2004, and a full color second edition has recently been published. 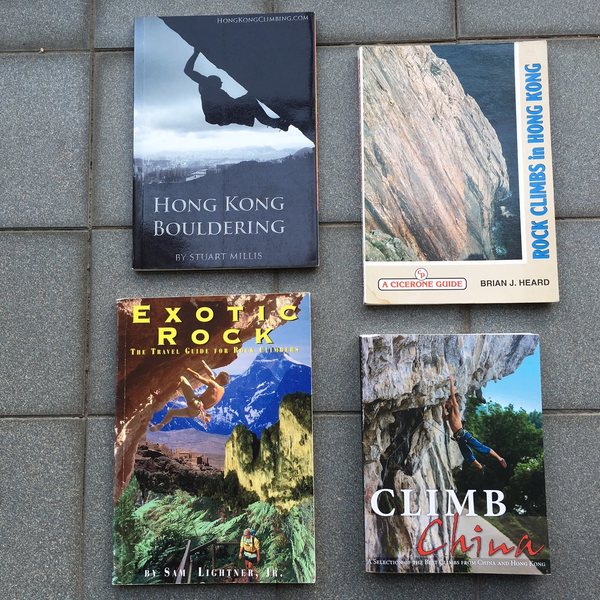 Hazards. If the heat and humidity don't kill you, Mother Nature will! Opportunities for injury and mayhem:

Snakes! Here is the good news, according to the HK Agriculture Department:  Among the 14 venomous native land snake species in Hong Kong, only eight can inflict fatal bites (if not treated in time). The list includes multiple species of cobra, kraits, and pit vipers. We have pythons as well, up to six meters long. The good news, is that you will rarely encounter then, as most snakes are reclusive and/or nocturnal. An identification guide to the most dangerous snakes can be found here: 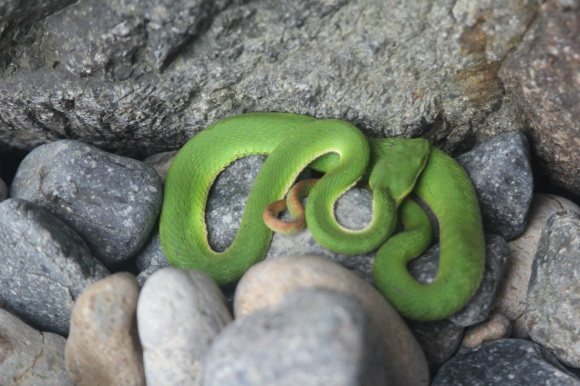 Big mammals! Wild monkeys (macaques) are common around Lion Rock and Beacon Hill, and can be aggressive if food is visible. Wild boars are seen in this same range, and often around Cape Collinson and other areas. The boars are reclusive unless you get in their face, or when piglets are present. And, if you visit the Blacks Link area, you can find some very healthy porcupines after dark.  Water buffalo are found in Lantau; they are mostly docile, but males are occasionally aggressive.

Creepy-crawlies! Giant centipedes grow to ten inches, and are an excellent reason not to turn over rocks.  They are seen occasionally, and are venomous. If you visit less traveled areas, you will see many golden orb spiders on or near the trail, typically later in the summer. These grow up to six inches in diameter, and have venom comparable to a black widow.  If you are looking to be bitten, Mount Nicholson and Kowloon Peak are excellent venues for this activity.  From personal experience, these bites do not result in superior wall-adhesion abilities.

Loose rock!  More common in newly developed crags, as well as in drainage areas e.g., both the Zawn at Cape Collinson and Shoot Gully at Mount Nicholson are prone to rockfall.

Bad bolts!  Old bolts are gradually being replaced by titanium and stainless glue-ins. Older bolts do occasionally pull out or shear off.

Climbing gyms and walls.  HK has a number of options for pulling plastic. Private climbing gyms are exclusively focused on bouldering; although they typically have a short toprope wall, this is usually for kids and belay training. On the Kowloon side, there is Just Climb and Go Nature. On HK island, there is the Attic gym in Aberdeen. The YMCA operates two walls in Kowloon: An indoor wall in TST, and an outdoor lead wall in Jordan. The Jordan wall – at the YMCA King’s Park Center – has routes nearly sixty feet high, making it taller than many of the outdoor areas in HK. Belay certification is required, and must be prearranged. Finally, there are climbing walls at a number of government sport facilities, in both Kowloon and the New Territories. These walls vary from site to site: Some are indoors, while others are outside. The shortest wall is about 20 feet high, while the outdoor wall at Shek Kip Mei is nearly as tall at YMCA Kings Park – about fifty feet high. The Hong Kong Mountaineering Union controls access to government walls, and the experience is far from user friendly. The easiest way to visit one of the government walls is through one of the several Meetup groups, which schedules a number of sessions each month. There is little to no active route setting at either the YMCA or the government walls, and often no marked routes. 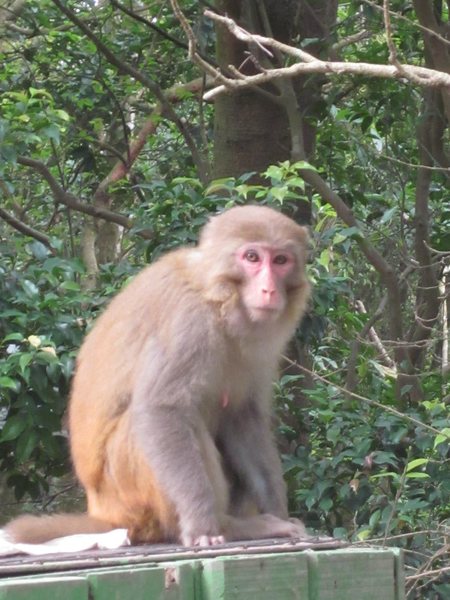 Monkeys are common around Lion Rock and Beacon Hill.

Local ethics.   Some things to be aware of:

Few people in Hong Kong own trad gear, so the vast majority of cracks have been bolted -- some of these during the FA (e.g., Break Away at Cape Collinson), and others retro-bolted (e.g., King Cobra at Beacon Hill).  Similarly, many of the bolted routes at Lion Rock were originally done as trad leads.

Re-bolting is generally desirable, but adding more bolts to existing routes is best done in consultation with the first ascensionist -- sometimes they are happy to have an extra bolt or two, other times not.  Persons wanting to improve sport routes in Hong Kong but lacking the time/expertise/equipment to do so can donate funds to cover the cost of materials.  Please see the Hong Kong Bolting Forum Facebook page for more details.  www.hongkongclimbing.com also maintains a list of re-bolted routes.

Rock in HK is sometimes soft (e.g., Monkey Buttress and Black's Link) or subject to fracturing (e.g., Ap Lei Chau, Cape Collinson).  Epoxy resin is used on a number of routes to either reinforce or repair key holds on popular routes.  There are mixed opinions on this practice, but the consensus supports it when used judiciously.  Chipping, on the other hand, is not acceptable.null

2020 and 2021 have been an eventful year for climbing in Hong Kong -- including both positives and negatives.  Here is a quick recap:

* An explosion of route development!  The last couple of years have seen an upsurge in the number of new sport routes, as well as many new trad lines.  These are mainly new crags which have been discovered, with a number of new lines also added to existing crags.  There are new sport climbing and bouldering guidebooks with all the details. Francis Haden’s sport climbing guide (available in digital format from Rockfax) describes 1,000+ bolted routes, with hundreds more to be added to the second edition.  Stuart Millis also published a long-awaited second edition to his bouldering guide to HK.  It took Stuart 20 years to publish a second edition, and copies are selling fast.  So, best not to wait for the Third Edition.

*New gyms!  Hong Kongers apparently have an insatiable desire for more gyms, and there have been a number of bouldering gyms added to the substantial base of existing facilities.

*Cliff closures!  Sadly, routes at several of the most popular crags in HK have been erased in a government-led bolt chopping initiative.  The short version is that anti-government protestors hang banners on the side of a cliff, then the government steps in and removes the banner, then vandalizes the bolts -- chopped, smashed down, or even covered over in epoxy.  All bolts and anchors at both Devil's Peak and the Lost World have been removed.  The lower wall at Beacon Hill and the east face of Lion Rock have been stripped.  The most established multipitch route in all of Hong Kong -- Gweilo -- has had its upper bolts removed; but is still leadable on gear.  The access pitch for Gweilo (Prelude) has at least one bolt removed, and the the upper pitch of Ward's Groove has also been affected.  The newest contender for best multipitch in HK (Fog of War @ Lignan Slabs) has had upper pitches stripped, and all of the Pandemic Wall at the Majestic Slabs has been vandalized. 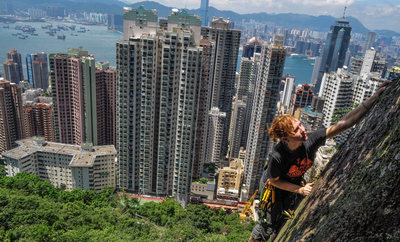 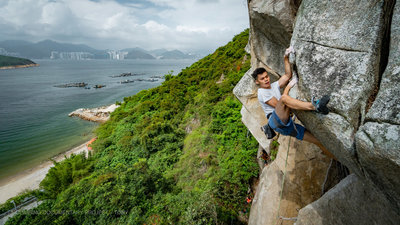 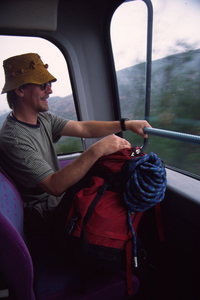 All Photos Within Hong Kong