This is the first major buttress a the right end of The Pipes. Routes here are shorter, less serious and often sunnier. If you are not familiar with the Pipes then climbing a route on this buttress is less likely to end in an epic encounter. Add in some shelter from a westerly wind and you have one of the best places on The Pipes for a sunny winter morning.

There are a great selection of classic, mostly one pitch, trad and sport routes and this is one of the few places on the Pipes that allows descents from trad routes with a single 60m rope - from DB anchors at the top of Rasberry Jam and Crackers (trad 18), All Systems Go (trad 18), Sideshow (trad 18). Single rope raps also from Boy's Games (sport 22), Pension Day (sport 20), Game On (sport 21). All these are great climbs.

Most of the other moderate trad climbs such as Pulpit Chimney (12), Pegasus (14) Tearaway (18) and Centaur (17) require a 50m rap from the top of the Pinnacle or the top of Centaur, although it is possible with a single rope if you go down the sunny side from one of these stations and change anchors at the top of Sideshow.

Access to Northern Buttress is via the track from the LH end of the parking bay which crosses the Organ Pipes Track and continues on up the hill. Where the track meets the base of the buttress, go up R where the best routes are found on the sunnyside of the Lower Cliff. The LH side or darkside is more broken and is bounded on the L by Chockstone Gully, which leads up to the rear of the Notch.
The ridgeline of the buttress is split halfway along by a gap in the ridge known as the Notch. The pinnacle immediately L (east) of the Notch is Buttress Pinnacle (rap station). The cliffs R (west) of the Notch comprise the Upper Cliff area. The pinnacles along the Upper Cliff skyline form Sentinel Ridge (14). Descriptions begin with climbs on smaller buttresses on the R and uphill of the main Buttress and are described R to L.
Descent: Check each separate crag for details. 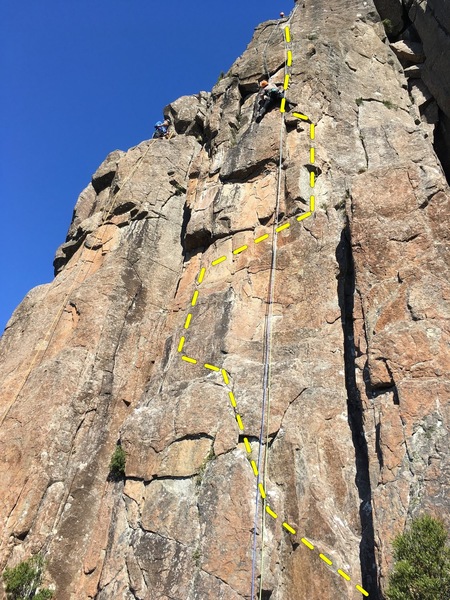