The cliffs of Ben Lomond provide arguably the best climbing in Tasmania. Anyone interested in the finer points of jamming can perfect their skills here, with soaring, unblemished cracks rising 200m straight up. But beware, one of the problems of climbing here is gear related - it is not uncommon that you will require at least four pieces of identical protection, so perfect are the cracks - some are known to require a rack of at least fifteen friends! The other down-side is that some climbers also find some of the climbing a little boring, so unchanging is its nature.
Being near one of Tasmania's premier skiing resorts (if there is such a thing), climbing is only possible during the summer months (December - January). For those inclined, winter climbing would certainly provide new problems - don't forget the ice screws! At an elevation of at least 1300m, the crags are very high (by Australian standards). Even in summer weather changes will occur very quickly, so don't forget your warm gear or be prepared to shiver. On warm summers afternoons though, this place is complete bliss.
There are few facilities in the park, so bring everything - lunch, clothes and water (for some crags). Don't forget either some tape for your hands or bandages - the choice is yours! The best map of the area is probably the Ben Lomond National Park Map and Notes, available from most camping stores, though it's hardly necessary.
The cliffs on Ben Lomond are widely considered to be in a no bolt zone. This is not the opinion of a mere individual, but the current consensus of the Tasmanian climbing community. In the future this situation may change so it should be considered an open topic for discussion (consensus climbing ethics aren't, after all, carved in stone). In the meantime please respect their current natural status; you are unlikely to run out of challenging climbs anyway. For more information check outthesarvo.com

Ben Lomond is located about 50km south-east of Launceston. It shouldn't take much more than an hour to be at some of the closer crags, though with walks of up to two hours some are more suitable as weekend epics. Watch out for wildlife in the wee-hours, as the National Park is crawling with it. 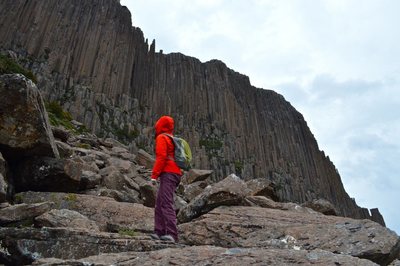 All Photos Within Ben Lomond