Or "The Pass". Usually approached from its summit and down towards the old slate mining town of Llanberis. Drive down this narrow winding road into the heart of the area and get a grand tour of fantastic crags and climbs, culminating I suppose with Dinas Cromlech on the right and it obvious dihedral, known as Cenotaph Corner (5.10), probably the most famous climb in Britain.

There are worthy crags on both sides - and I have created two sub-areas, North Side and South Side.

At the summit of the pass is the Pen-Y-Pass Hotel, now a hostel I think, but in the early 1900's before WWI the scene of an Easter get-together hosted by climber and poet Geoffrey Winthrop Young - the likes of Mallory used to show up for these parties.

The Slate Quarries are a relatively recent addition to the repertoire, but shouldn't be missed if staying in Llanberis for a week.

The B&B's in the town of Llanberis are great, and there's a few restaurants and pubs plus two great climbing shops, one of which is Joe Brown's original (the other is at Capel Curig). There's also Pete's Eats a climbing greasy spoon which is a must do - chip butty (french fry sandwich) and a steaming mug of tea.

Turn off the A5 at Capel Curig and follow the A4086 (great views of Lliwedd and Snowdon) bear right at the sign for Llanberis, then up over the pass. 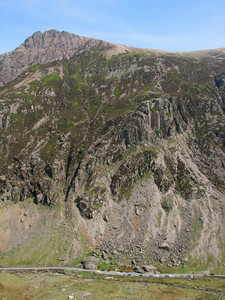 Llanberis Pass with Dinas Cromlech in the middle 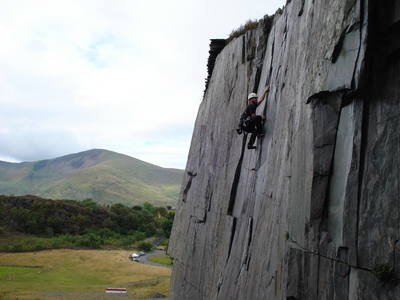 Darren climbing near the quarry 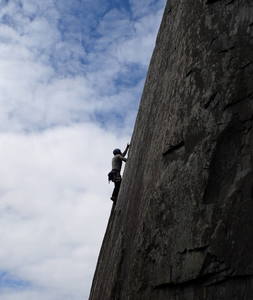 All Photos Within Llanberis Pass