The First Creek Slabs line the southern side of First Creek Canyon, starting just west (upstream) of the Lotta Balls and Romper Room areas. They extend for several hundred yards, forming a series of ribs and buttresses with a number of good routes. The slabs begin just a short distance above the streambed, so approaches are reasonably short and friendly. The slabs end a thousand to fifteen hundred feet higher, on a brushy ledge system beneath the imposing Upper Tier that extends another thousand or so feet to the ridgeline.

The first key landmark is the obvious right-slanting chimney of Rising Moons. Immediately left (east) of the small Rising Moons buttress is the descent gully used by Algae on Parade and routes ending of the brushy ramp. To the right of Rising Moons is the sequence of low-angle buttresses climbed by Sunset Slab, Big Sky, and the Romanian Rib. Still further to the west (and now a few hundred yards upstream from Rising Moons) is the Echove, a recessed area of somewhat steeper rock that is almost granitic in texture.

Hike in via the First Creek Trail. Most of the routes are reached by staying on the trail low in the canyon until beneath the climb. Routes on the eastern end, near Rising Moons, can be reached on a short traversing trail from the Romper Room area.

Descent From The Longer Routes of First Creek Slabs

This descent description applies to most if not all of the seven pitch and longer routes between Sunset Slab on climber's left and Hot Flash on the right. I've climbed Lady Luck, Romanian Rib and Hot Flash for which this descent works.

After reaching the ledge that is the end point of these longer routes, scramble / hike down (usually to climber's left) to the low point of the ledge. There is usually a cairn at this point on the ledge as well as another cairn about 20 feet down on slabs towards the canyon bottom.

1st rap, < 35m and possibly < 30m: rap from bolts down low-angle gully to platform with bolted rap anchor on skier's right; platform is where the terrain starts to become more open.

2nd rap, 59m: double rope rap from bolts down the slot/groove to bolted rap just on skier's left side of groove; if you only have a single rope, pendulum during rap to skier's right to rope-less terrain. Scramble down to 4th rap.

3rd rap, 35m: rap to low angle slab just above vegetation section; or, with a single 60m rope, rap into gully/slot on skier's right; either way, after the rap, scramble down through veg to next bolted anchor.

5th rap: 60m: double rope rap to easy slab-y terrain; if you only have a single rope, there are at least trees off to skier's right from which folks have split this rap into two.

If not done, scramble a little down to last slab-y platform before veg/dirt and head to skier's left end of platform to find ~6 ft part of a long down climb broken up by hiking/scrambling. 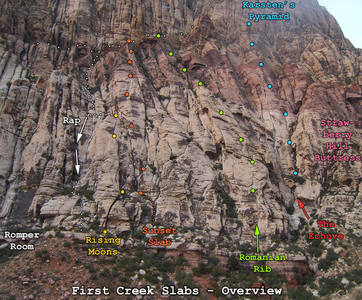 Overview of the First Creek Slabs, showing some… 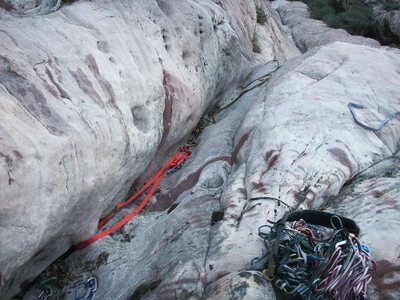 The second rappel off the first creek slabs. T… 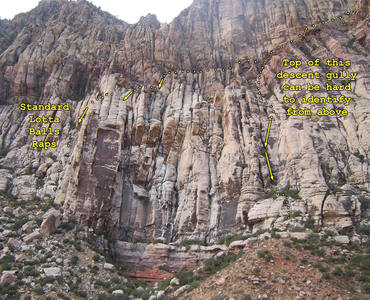 Descent routes from the brushy ramp system at t… 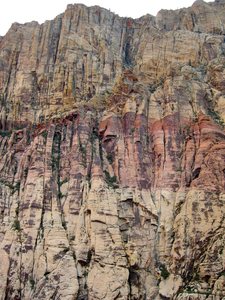 A view of the FC slabs from across the canyon.… 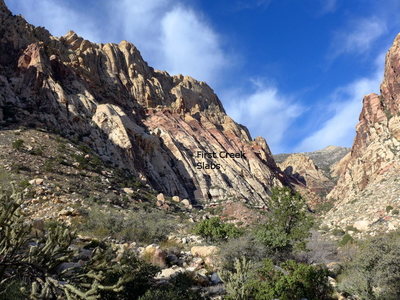 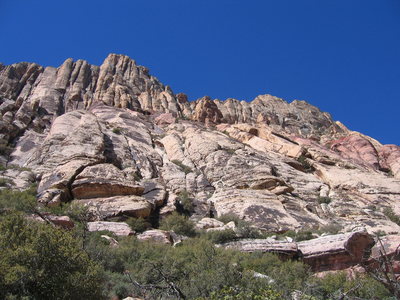 View from the approach. 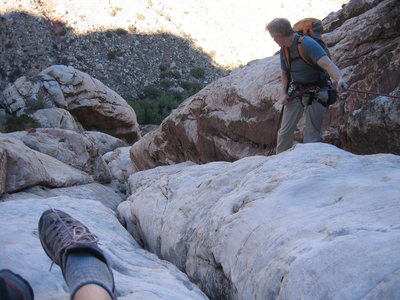 Our 3rd rappel. I think this can also be downc… 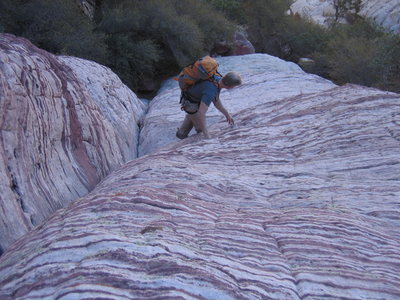 Easy downclimbing below the second rappel. 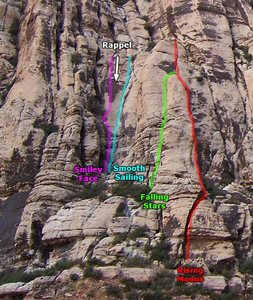 The routes at the lower left corner of the the… 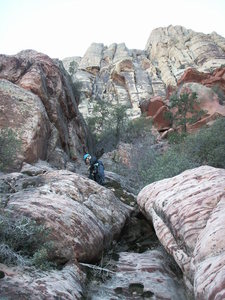 Sandra at the bottom of the first rappel from o… 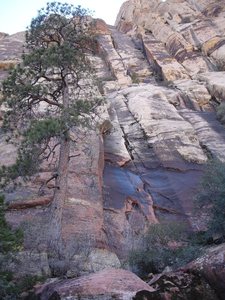 Looking back from the start of the First Creek…

All Photos Within First Creek Slabs

Featured Guidebooks:
Red Rocks, A Climber's Guid, Second Edition
Jerry Handren / 2016
The second edition of the book, and update to his 2007 edition. A comprehensive book including ev…