An interesting crag rising high and west above the Shadow Canyon trail near its top. The twin spires are slightly rounded on every aspect, but still quite steep, and unusually so for a Flatiron, which really, it is not. ShadowFax has vertical defenses, if not overhanging on nearly every aspect of both spires.
Perhaps this is because the rock is softer this far west and at this elevation, yet the crag lies just East Of the back of the summit of The Veil, which is considered an Eldo crag. Regardless, its lonely location and rounded features make it unique in the area.
There are routes facing nearly any direction on Shadowfax now, East, South, North, and a down-climb to the West of the Southwest spire. Seemingly none of these had seen a prior ascent. Until recently, the only nearby routes are on the 'Cubicle Crag', just downhill from Shadowfax... East, that is.
The rock on Shadowfax is not as good as some Flatirons. All routes to date required some cleaning, but most are now predominantly safe and reasonably well protected.
All cleaning was done on lead, ground up, and on-sight, though some secondary efforts in the event of multiple attempts on the second cleaning took multiple tries). As such some rock does remain that could break or be otherwise freed, and a helmet is probably a good idea for leader and belayer alike. This crag will never become popular enough to "clean up" completely or to merit such an effort. Its best feature might just be the solitude you can have up there, without another person passing within a quarter mile for months at a time.

The routes here tend to be difficult, cruxy, sequential, and well, just plain fun. If you want to get your traddie on, here is a place to try.

Approach Via Shadow Canyon from the South Mesa Trailhead. Continue up the trail for quite some ways past below the Devil's Thumb, and come to a brief clearing in the trees, from which you can look back and see Shadowfax, to the Southwest. You can even see on the right side of the West (higher) summit, the Northeast-facing flakes of "Thirteen Words for Choss" which is easily the worst route on the crag.
Approach cross county up and left from this point, striking out at a shallow angle towards the base of the higher spire on the North side. This is perhaps 800 meters, but is a better approach than heading straight up from below, where you can scarcely see you target, will fight up hill, and then have to walk north around below the base of some collapsing slabs, then Cubicle Crag, just to reach Shadowfax anyway. Total approach time is ~1h 10m at a reasonable and steady pace. 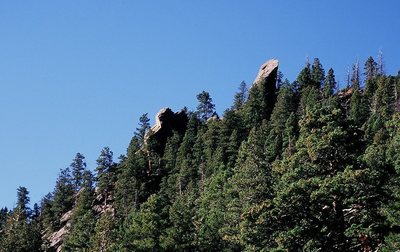 Shadowfax & Cubicle Crag, as seen from the appr…

All Photos Within Shadowfax