Hidden well within the boundaries of the Sierra National Forest is Courtright Reservoir, the "lost sister" to the ever captivating Tuolumne Meadows. Located 2 hours east of Fresno, Courtright boasts of the same qualities as that of the terrain found in the high country of Tuolumne. Pristine, high quality granite domes torture the climbers imagination and entices any adventurer to scout the infinite possibilities. The signature landmark upon entering the Courtright area is the alluring formation, Power Dome. Teeming with a host of 5-pitch, friction scare-a-thons, Power Dome will make a marked impression in the minds and hearts of inspiring rock jocks. Scattered around the perimeter of the reservoir are a myriad of other domes and walls. Trapper, Spring, Maxon, Penstemon and Dusy are just a few domes that provide countless adventures, where traditional and sport climbs abound. Although the domes provide ample friction, smear and fine edge climbing routes, Courtright also offers several crack climbs at areas like Tiger Wall and Tiger Cage (featuring the hailed twin splitter, "This Pussy Eats You"). The Sequoia/Kings Canyon guidebook by Sally Moser, Greg Vernon and David Hickey, has dedicated over a third of the books contents to Courtright Reservoir alone!! Best of all, you won't find yourself pulling from the ticker- tape to wait your place in line for a route. The majority of the visitors that frequent Courtright are fishermen. And, of course, the final beauty of the place is that the camping is FREE and so are the spectacular views into the Goddard Divide.

This section is a summary of the domes and walls featured at Courtright. Of course, an adventuresome spirit is warranted to explore the overall area but the use of the Courtright Reservoir & Vicinity guidebook is extremely helpful. This guidebook provides ample information on the "how's, where's, what's and when's" to Courtright climbing.

The listing of domes and features are in order of the most southern feature to the most northern feature (based on moving counterclockwise around the reservoir):

Dome of the Immaculate Conception (aka Notre Dome)

Located to the east by following the Short Hair Creek, this wall features some moderate yet wildly exposed climbs. It also has its share of steep and overhanging routes (5.7 to 5.11).

Hidden to the east, just a few hundred yards off of Courtright Rd and slightly south of the reservoir, Tiger Cage has a variety of climbs: thin friction slab, steep face and cracks. Be sure to check two of its classics: 'This Pussy Eats You' (5.10b), a nice lead climb for potential crack fiends, and 'Eye Of The Tiger', a fun yet challenging 5.9/.10a. The later climb is located on the left most part of the wall, along with two other new routes to the left; 'Give That Cat A Comb (.10a) and 'Flintstone Feet' (5.8+). All are good lead warm ups for the ever classic multi-pitch 'A Little Nukey' (5.9-) on Power Dome. There are several anchors that can be accessed on top for top roping most routes.

Located down in the Helms Canyon, next to the reservoir spillway, this wall seldoms sees traffic due to loose rock. However, there are some selected routes that won't disappoint crack climbers: 'American Pie' (a 3 pitch, 5.9) and 'Knappy Sack' (a mellow 50 foot 5.10a)

Located in the Helms Canyon, one can spot this dome to the right from Courtright Rd. (upon entering the area). This dome is the hallmark of Courtright and rightly so. Power Dome hosts some bold friction climbs with the occasional solution pocket for psychological comfort. A word of caution: most routes are runout like the routes in Tuolumne! Rest assured, Power Dome claims several classics. 'Helms Deep' (.10c R), the first route to go up on Power Dome by Stephen McCabe and Al Swanson. 'Welcome To Courtright' (5.10a), 'A Little Nukey' (5.9-), Eve Laeger's route 'Esto Power' (5.10d) and 'Consider Me Gone', a sphincter tighting 5.10c....tough for it's grade!

If your skills aren't in the highly honed catagory, Punk Dome will surely make a punk out of you! With nothing easier than 5.10, Punk Dome is located southeast from the reservoir (next to Penstemon and Dusy Domes). However, this dome has only four reported routes on it with loads of first ascent potential (ranging from 5.10-5.12). Recommended climb: 'Reach For the Sky' (5.11a) which starts at a bleached white section, on the left side of the dome.

Some liken this dome to a classic backcountry dome with only a 15 minute approach. This dome is located east of Punk Dome. Most routes are steep friction/edging climbs or crack corners. Highlights to Penstemon: Rope-A-Dope (5.8), Shake the Flake (5.9), Song Of The Earth (5.10a) and a route unnamed, left of 'Song Of The Earth'. The guidebook shows the crux to be 5.11 but has been downrated to 5.10b (at best).

Due to its proximity to Punk and Penstemon Domes, this dome is hardly frequented by climbers. Although it is host to many challenging steep slab climbs, Dusy shouldn't be passed up. Climbs range from 5.7 to 5.11a R/X. A couple of new routes have appeared since the SeKi guide was published. Notable routes to check out:  Black Satin Slips, Neener Neener, and Little Lambs Eat Ivy.

Located directly east of the reservoir, this dome is where heros are made and cowards are sent home! Traditional by nature, Voyager features many crack routes and even a few aid lines (Doughballs On a Rampage 5.11a A2....put up by SP's very own, Kris Solem). This dome was once featured in an article of Climbing Magazine, exposing the hidden gems that Courtright features. Even Voyager's 'Ramp On' (5.6) makes for a wild challenge to the fledgling leader. Highlights to Voyager Rock: 'Smoke For Face' (5.11a, FA: Dwight Kroll) and 'By Jupiter, There Are Rings Around Uranus' (5.11d, FA: Herb Laeger and Kris Solem).

Named after the late Bob Locke, Locke Dome is the most remote of all domes at Courtright. Situated past the northeastern shoreline of Courtright Reservoir, Locke Dome has only three routes upon its flanks but contains loads of route potential. If your willing to make the effort, hiking or boating, Locke will pay dividends to any backcountry climber.

Beyond the northern shore of Courtright is Leopold Dome. This dome has a wide array of climbs from beginner to expert. From crack to face, Leopold exhibits the same characteristics as Penstemon Dome. Most of the moderate climbs are well bolted and range from 5.7 to 5.8+. Don't miss some of the stiffer rated climbs such as 'Burnt Beyond Recognition' (5.10c), a total calf incinerator. Highlights to Leopold: 'Piss Flaps' (5.8+) and 'Sinners In The Hands Of An Angry God' (5.10b).

If you haven't got your fill of sport climbs then Trapper Dome is where you want to go for "clip and go" routes. This dome is located on the western side of Courtright, left of the Trapper Springs Campground Rd. Within 10 minutes, you'll be cranking up high quality granite with generous amounts of fixed protection along the way. Even Trapper Dome's easiest route, Drill Instructor (5.4, 110 ft) covers 10 bolts to a chained belay! But as things stiffen up around its southwestern wall, you'll be praying for more, especially on routes like the 'Carson-Kodas Arete' (a super wild and exposed 5.11c). Highlights to Trapper Dome: 'I Wouldn't Wanna Be Like You' (5.10d/5.11b) , 'Zodiac Mind Warp' (5.10d) and 'Rhythm Divine' (5.10d), 'Orgasm Addict (.10+).....all rating 4-star glory! Be sure to check out the backside of Trapper Dome's north side, known as The Sex Wall. This area features excellent bolted slab routes ranging from 5.8 to 5.10d. Goes into the shade late in the afternoon. Amazing views of the reservoir and beyond!

Most people from the Bay area or Los Angeles, drive to Fresno via Hwy 99 South or North, respectively. Once in the Fresno city limits, take Hwy 180 East toward Kings Canyon. Stay on the 180 until the exit appears for Hwy 168 East. Exit onto Hwy 168 and travel its length to the town of Shaver Lake (30 miles), passing the small town of Prather along the way. After Prather, Hwy 168 will become a 4-lane road heading up a moderately steep grade. The highway will return to a 2-lane road at the top of the grade before reaching the mountain town of Shaver Lake (another 4 miles, once the highway returns to 2-lanes again). Just inside the town limits of Shaver Lake, turn right onto Dinkey Creek Rd. Follow this for approximately 11 miles to almost the roads end. Prior to the road ending (approx. 1/4 mile) is McKinley Grove Rd. Turn right onto McKinley Grove Rd and over the bridge that crosses Dinkey Creek. Follow McKinley Grove Rd. for approximately 13 miles till one reaches a signed intersection for Courtright and Wishon Reservoirs (this sign appears after travelling on the only mile long straight section of McKinley Grove Rd!). Turn left for 'Courtright Reservoir' and follow this single lane access road for approximately 8 miles to the reservoir. You'll know you're there when you get your first amazing eyeful of Power Dome on the right side, prior to arriving at the shore side of the reservoir. Total approximate distance travelled from Fresno is 100 miles and takes roughly 2 and half hours to complete.....but 'oh-so' worth it!

Although a fire permit is required for any campfire constructed in the national forest, the remaining amenities are FREE! All fire permits can be acquired at the Sierra National Forest HQ building, located in Prather along the 168.

There are also paid campsites available in Courtright, sponsored and maintained by PG&E. The camping fee per site is $25.00 per night. The campsite are provided with picnic tables, fire pits, water and pit toilets. There are two sites: Voyager Rock campground (14 campsites, tents only) is located on the southeast shoreline of the reservoir while Trapper Spings campground is located near the western shoreline, 2.2 miles to the north (following the single lane road along the west side of the reservoir). This campground has a total of 75 tents sites and 45 trailer sites. This campground is within stone's throw distance to both Spring Dome (aka Marmot Dome) and Trapper Dome.

As for other camping, respect the areas that are signed as "No Camping" areas. But for the most part, camping is FREE. Let's do our part as a climbing community and keep it that way! Respect all national forest rangers and PG&E employees.

The best time of the year to climb at Courtright is from late spring to late fall. Generally, PG&E maintains the access gate to Courtright (locate at the beginning part of the Courtright Rd). This gate usually opens on Memorial Day weekend or on a day that PG&E can access Courtright if the snow year was heavy. Closure depends on when the first good snow comes. The usual rule of thumb is follow the same closures observed as that of Tioga Road (Hwy 120). It will be PG&E's call when they will close the gate for the season. Check for gate conditions with the Sierra National Forest HQ in Prather (559) 855-5360 (press "0" for immediate transfer to a ranger). For all practical purposes, DO NOT call PG&E directly! The management with PG&E, at Wishon Reservoir, work hand in hand with the forest service and keep the national forest informed of all company activities, road closures and/or miscellanous information needed for recreationalists and visitors.

Daytime temps range from the low 60's to the low 80's, depending on the time of the year. Nightime temps usually range from the high 30's to the upper 50's.
Thunderstorms have been known to blanket the area over the summer. But for the most part, blue skies and wide open vistas prevail. 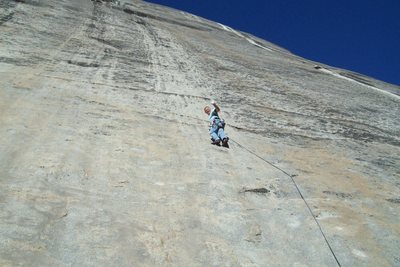 Mike Arechiga on the first pitch of, A Little N… 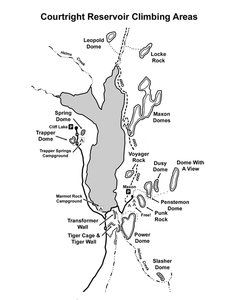 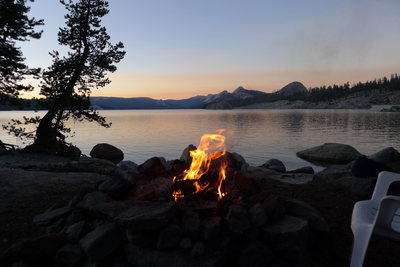 Camp site by the dam 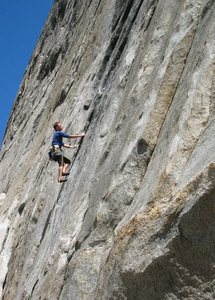 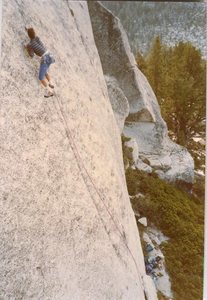 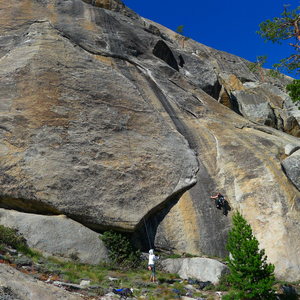 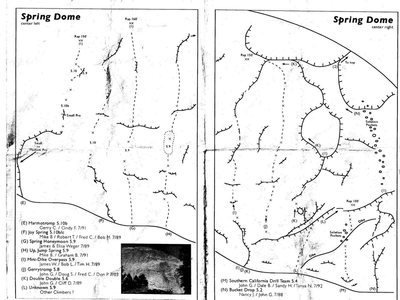 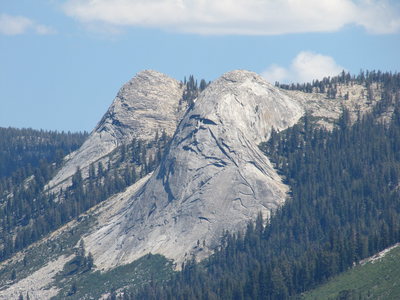 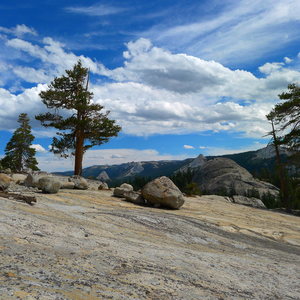 The Maxson Domes in the back ground. 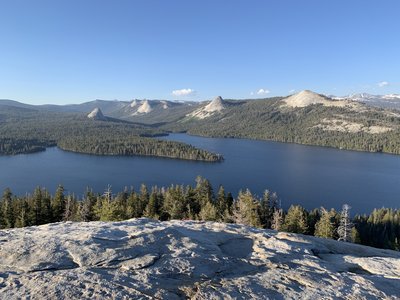 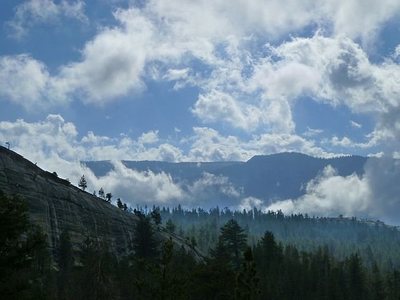 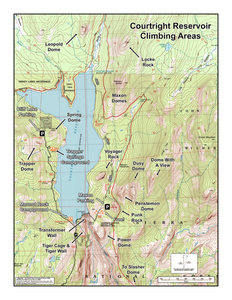 All Photos Within Courtright Reservoir