Despite the close proximity to London the South East is probably the least visited (from outside the region) climbing area in England. Typical climbing is on small sandstone outcrops, which are normally top roped or soloed (the rock being too soft to protect with traditional gear).

The grading system used on South East sandstone is not like anything else in the UK. Only UK technical grades are used by the locals. Starting at 1a and ending up at 7a+. The grades go something like; 1a, 1b, 2a, 2b, 3a, 3b, 4a, 4b, 4c, 5a, 5b, 5c, etc. The reason there are no adjective grades used is that there is no leading. Routes are typically top roped or soloed. The bouldering grading system isn't broad enough, and since most of the climbs here are typically higher than you would normally boulder, the UK technical grade system suites it well.

All the rock found here, wether it is sandstone of the chalk is extremely soft, so take that into consideration. Soft chalk is good for the ice tools, soft sandstone is bad for the longevity of the climbs - take care always to preserve the rock!!

From London head South on the A21 towards Royal Tunbridge Wells. 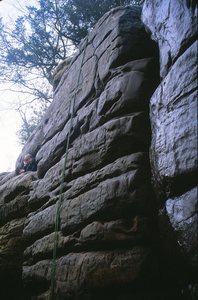 Dave relaxing on the traverse of Easy Clefts

All Photos Within South East