This short approach, easy routes (5.4-5.9), and setting makes this a popular area both for climbing and spectating. And with only about six routes, get here early to avoid waiting to get on the rock.

The rock is the standard metamorphic rock found in this region, although it is slightly slabby and very polished on the center climbs. A large ledge in the center of the wall makes several of the climbs significantly easier. The cliff is right off the old railroad grade, now a popular trail, and faces north.

Remember to keep the railroad grade clear so bikers and hikers don't have to go around your gear.

-->The following is contributed by long-time route developer in the area (copied from his comment below):

NOTE: BOLTS AND HANGERS ARE BEING DAMAGED ON THIS ROCK BY MISUSE. I think people or groups are using protection bolts as directionals from anchors on neighboring climbs, and this is twisting bolt hangers in ways that can loosen the nuts and damage the bolts' threads.
The route Legacy Bolt was installed in fall 2019. Last year the second bolt hanger went missing, and the bolt threads were so damaged that a nut could not be threaded onto the bolt to replace the hanger. The bolt had to be replaced in a new hole. This spring the hanger on the last bolt went missing. When it was replaced yesterday the bolt spun in the hole and was loose. Fortunately it did re-tighten, but it is likely to loosen again. Other hangers on Write-Off Rock have loosened, though I don't know if they have disappeared.
Please use this cliff wisely. It is probably the most climbed-on cliff in the state and the anchors get heavy use. It appears that someone or some practice is loosening the bolts, possibly by toproping a route to the side of top anchors by using bolts as directionals. If the anchor is above and to the right of the clipped directional, the force from the weighted toprope can spin the hanger counterclockwise, loosening it. Then the loose pieces mar the bolt threads, and/or the nut and hanger fly off into the unknown.
This should be preventable:
Read up on the mechanics of bolts and placement.
-Check the tightness of bolt hangers and nuts when you climb. A spinner can be snugged somewhat by turning the hanger counterclockwise, hand-tightening the nut, and using a quickdraw to crank the bolt hanger clockwise.
-Avoid setting directionals that lever on the bolt hangers. Toprope from anchors directly above your line.
-If something is wrong, post it.
-Consider carrying a wrench or other tool to tighten loose bolt hangers on cliffs you visit frequently.
-Bring a bolt hanger and nut or two to the cliff if one was missing last time.
-Don't assume a route developer or "the locals" will maintain and upgrade fixed protection.
-Donate to the WARP (Washington Anchor replacement Project). 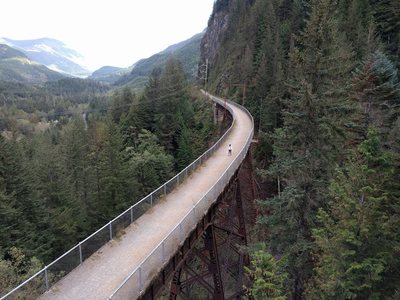 View of the bridge on the Iron Horse Trail from… 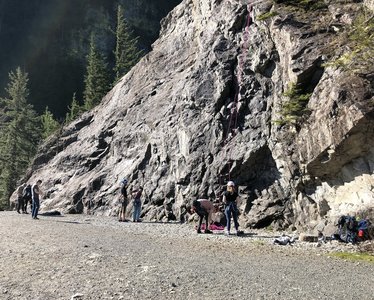 The top of Write-Off rock

One of the harder Write off routes 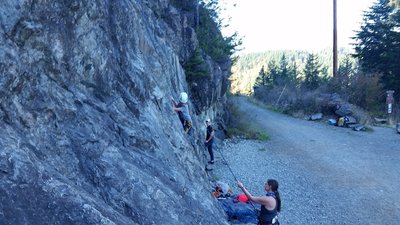 Young climbers on an October evening. Route is… 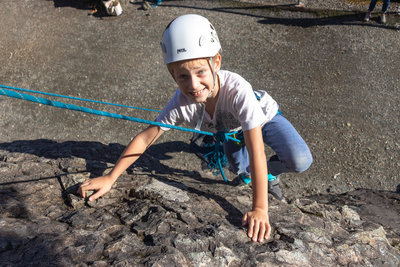 Michael on his first time climbing outside

All Photos Within Write-off Rock