Though boulderers have been climbing here for years, climbing is not allowed according to the current Cleveland Metroparks regulations.

Was once a quite and secluded area from the main populace where you could find quiet and not many climbers ...

... Chippewa Creek Gorge was formed by glacier movements thousands of years ago. These glaciers exposed outcrops of Shale, Berea Sandstone, and Euclid Bluestone. In the late 1800s the Berea Sandstone and the Euclid Bluestone were quarried for use as building materials. This ended in the early 20th century due to a decreased demand for natural stone for construction. Brecksville Reservation was declared a public park soon after.

In the late 1990s the first information about climbing in the park was posted to another rock climbing website. Problems were put up and documented by that generation of climbers, but not everything was posted back then, and the website ended up becoming defunct. Legal access to the park for climbing was problematic. There was a high risk of getting your gear confiscated by park rangers. Around this time, Jeffery Bonatti created a series of hand drawn “Ruff Guides” for the park, but they weren’t highly accessible. Due to this lack of organized information, each subsequent generation of climbers claimed FAs and gave names to lines that have likely been claimed and named multiple times before throughout the years. To add to this, the moss and lichen covers boulders that don’t see much traffic and makes it look like they’ve never been touched. The creek changes the sand bars and covers or reveals footholds and washes away evidence of being climbed.

Currently, the park is more accessible and more developed for climbing than recent history. There is a trail being made by the park system going from the main Gorge Rim trail down to the creek where Pinch Arete and Keyhole are. Due to the volume of climbers that have been recreating in the park, it no longer feels sketchy to walk in with pads for a session due to power of the masses. On any pleasant day you can fully expect to see other people climbing. Work is being done to organize the lines into a definitive list with proper photos, names, locations, and grades.

On the topic of conditions, many problems have had holds broken off in recent years due to being climbed when the rock is still wet. The boulders in the creek itself are much more tolerant to this due to many years of water erosion, but the rock higher up on the cliff line isn’t used to this kind of stress and breaks surprisingly easy. Surprising like, wow I’m falling but the hold is still in my hands, surprising. It usually takes a solid three days of dryness and wind to get back into shape after a good, longer in the spring and winter.

The main parking area for climbing access is the Pavilion area at the East end of Chippewa Creek Drive. It isn’t the first lot by the waterfall, it is ~1000ft down the road, where there are four parking areas grouped together with a swing set and a pavilion. If you walk straight North from the swing set you'll find the chained entrance to the climbing trail with a sign that states “Stay on the designated trail.”

The first parking area is downstream from the dam and provides access to a fewhighball problems. Further south on the park drive is another large parking area with families, swing sets, and pavilions. The approach here isn't as straight forward yet it is organized. 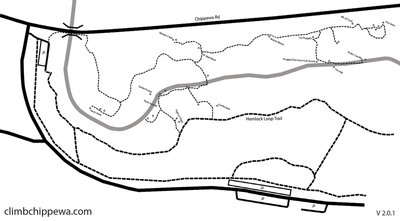 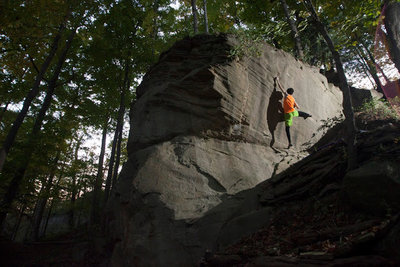 All Photos Within Chippewa Creek