Routes in The Dihedrals

This crag is on private property. CSX owns the tracks you must cross to get to the crag, but apparently they don't seem to care. The actual cliff is owned by an unknown private individual who's policy hasn't been established.

Due to an unfriendly owner, several years ago nearly all of the routes were stripped of fixed protection, including anchors.

Be sure to read the access warning, as some/most routes have been stripped.

The Dihedrals is a perfect example of making do with what you have. In the rock starved NYS Thruway corridor, this crag is your best option for leading and pushing your limits on harder routes. Admittedly, the atmosphere of the crag is horrible, the railroad tracks are very close to the base of the crag. After a recent train derailment, the buffer of trees between the tracks and the crag has been removed. When you can't get to the Dacks or Gunks this crag will fill your fancy though. Climb here enough and you will learn to love the smell of railroad ties and tune out the rumble of passing trains.

In the out-of-print guide for Little Falls, "The Dihedrals" refers to the tallest, right most section of the uninterrupted cliff line on the right side of the abandoned factory. Each section of the cliff was given it's own name. The crag really isn't that big, so today we refer to this entire area as "The Dihedrals".

None of the routes here are more than 65ft in height. While the routes may seem short, they are the some of the longest in Little Falls. Most of the routes are pretty clean with the exception of Cotter's Corner. The rock type is metasyenite, similar to granite, but lower in quality. In some sections of the cliff the rock has a smooth black finish which makes it very hot in the summer. Other sections of the cliff bare a slight resemblance to Keene Valley area crags like The Barkeater Cliff or Pitchoff Chimney Cliff. Overall the rock quality is pretty good, I would take this crag over the popular limestone choss of the Niagara Escarpment any day. Surprisingly, this crag doesn't see much traffic, people would rather spend 20 mins setting up a TR to climb a 20'-tall face on Moss Island.

The routes themselves are diverse, ranging from 5.4-5.12+. The crag has an array of cracks which take great gear on lead. Over the past few years, modern, bolted face climbs have been established. Some of the climbs can be TRed by walking around to the right side of the cliff, others must be lead on bolts or gear. Standard rack to #4 camalot.

After getting off the thru-way, turn right on route 5 at the "T" intersection. Make a right onto River Rd. Follow this road until you reach a gate, park at the pull off.

Classic Climbing Routes at The Dihedrals

Mountain Project's determination of the classic, most popular, highest rated climbing routes in this area.
More Classic Climbs in The Dihedrals » 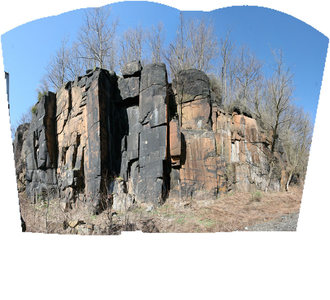 Most of the Dihedral Wall. 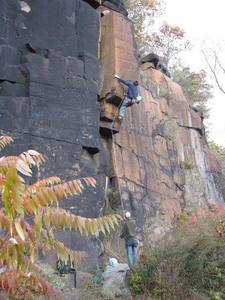 All Photos Within The Dihedrals


More About The Dihedrals