Leave no trace, keep a low profile, and park off the street.

Old, Weathered, Volcanic ... these are the terms that come to mind when one thinks of the climbing options in the Reno area. The Sommerset zone is the exception.

Its unclear who first found and climbed these boulders, but there is no doubt a previous generation came through years ago and ticked a few of the most obvious lines.

But few references to this spot exist, that said, occasional signs of past, and sometimes ancient, development have appeared including a small number of cleared landings, a lone shiny bolt in a really funny spot, and a set of weathered top rope anchors in another.

We respect and wish to honor those who have come before us here, If you have climbed here and would like to contribute, or see any errors in our information... Please do not hesitate to make contact.

Yes, you are going to run into a few problems here that could be considered contrived and low-ball. Such is the nature of the Washoe Valley where quality routes of any kind are virtually non-existent. But, you'll find even the hokey problems are fun, and will you give you a good pump! Mixed in with these one will also find plenty of classics, on quality stone, with great landings.

There are a number of different zones, each containing a smattering of decent problems on generally good granite. Some lines are can be gritty, new lines on these boulders often require extensive prep.

The first area, the East Side, runs from the sommerset entrance road cut westward and contains probably 15 or more boulders scattered across 2 ridges and canyons. Rock Quality varies with the best stone usually found on the ridge tops with more grit the lower into the canyons you go.

The middle area is pretty much ground zero ... With two distinct clusters; the area holds a solid stash of problems with good landings across a dozen or more solid, sharp, tan granite boulders. Rock quality is good here and new lines are still be had.

Walking southward along the middle zone hillside one can really get a taste for this areas potential, the zone has a semi-wild feeling but then houses are encroaching. Potential boulder problems dot the landscape here, but this is tough country and each potential FA requires the suitor to put his or her time in to make the climb at least semi user-friendly.

The third area is the West Side, this zone is comprised of three separate granite outcroppings that all sit on the same plateau. Here you will find a decent variety of problems with a little something for everyone. Some of the cliffs here are broken into tiers but still hold some great climbs.

The Fourth area, the Primordial Soup Zone, is to the North of the boulders and is a different deal all together. The rock here is primarily sandstone and is friable, but with a bit of technique one can ascend even the steepest lines. And this crag is steep! Super overhanging and well featured, a good pump can be had in a short time and the walk is less than 10 min.

For anyone wanting to climb within the Sommerset zone, there are a few things to be aware of. If you don't live in the area, it's possible you can be harassed by the security driving around. So be discreet, and kind to the loc's.

Most of all though, please respect the area so we don't lose the privilege. Carry out everything you bring in, no new permanent anchors of any kind, and please use good judgment when "cleaning" new lines. Be respectful and friendly if you do encounter the securitas, or local residents. Watch for Rattlesnakes, Bring a pad or two, clear a path while your out there ... and have fun : ) 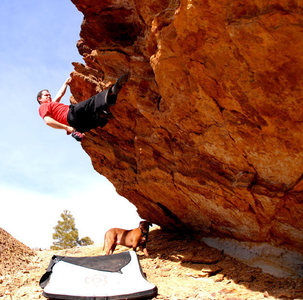 Sean S bags the first ascent of The Dark Hamste… 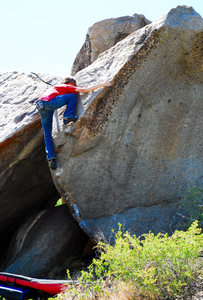 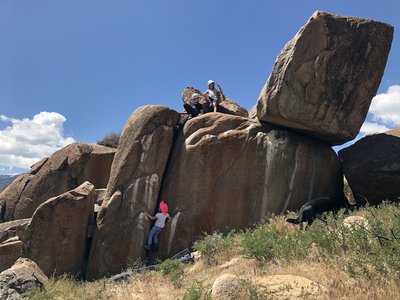 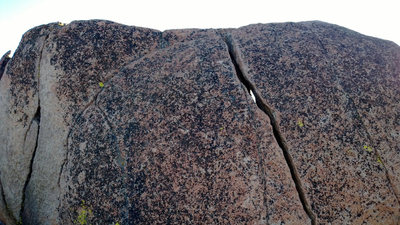 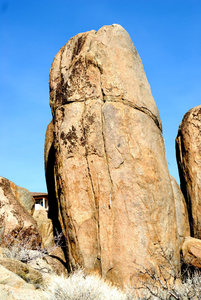 Cool free standing pillar on the west side 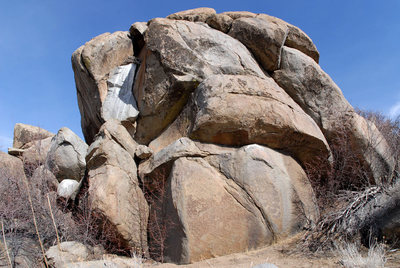 We call this formation the lower west side, so… 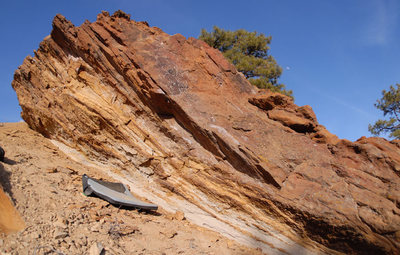 All Photos Within Somersett Boulders