Per Henry Lester: all the dirt roads into the climbing and camping areas are closed to motorized vehicles until July 2015 because of resource degradation.

Per Henry Lester: all the roads have been reopened as of June 2014.

This is a really nice state park just east of Vedauwoo proper. Historically a fishing and boating destination, as it contains 3 reservoirs with lots of trout. But if you take a look around you will notice lots of boulders....

So far, everything that I have done here is all bouldering, but I think there is some possibility for routes as well. I have a feeling some oldtimers (even older than me) have probably done some of it.

From Vedauwoo, continue down Vedauwoo road all the way to Happy Jack Road (Hwy 210). Then go east on Happy Jack for about 3 miles. You will see a sign pointing to the south that says Curt Gowdy State Park. 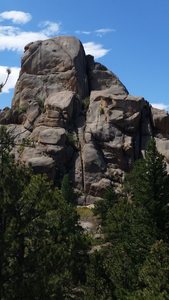