Peregrine Falcons closures are very often in place particularly around February to the end of July and will affect almost all of Maryland Heights and not likely the other surrounding cliffs.  Please check Harper's Ferry Alerts prior to visiting. goto nps.gov/hafe/planyourvisit and you may need to expand the page to "View all alerts"
Registration is required prior to climbing on Maryland Heights. To register visit the Lower Town Information Center.
Climbing is Closed in all of Virginia and West Virginia at Harper's Ferry

Please respect falcon closures which commonly occur from Feb 15 - July 31. A significant portion of Maryland Heights is closed to protect nesting Peregrine Falcons. All routes from the Gully to the Confederate walls are closed, including the popular Sign Wall and Ramps.

Maryland Heights is the tallest rock in central Maryland reaching 200 feet tall and offering much multi pitch trad climbing, some sport lines, and a few aid lines. There is very little top-roping that can be done without leading a climb first. Be sure to check out the area division photo 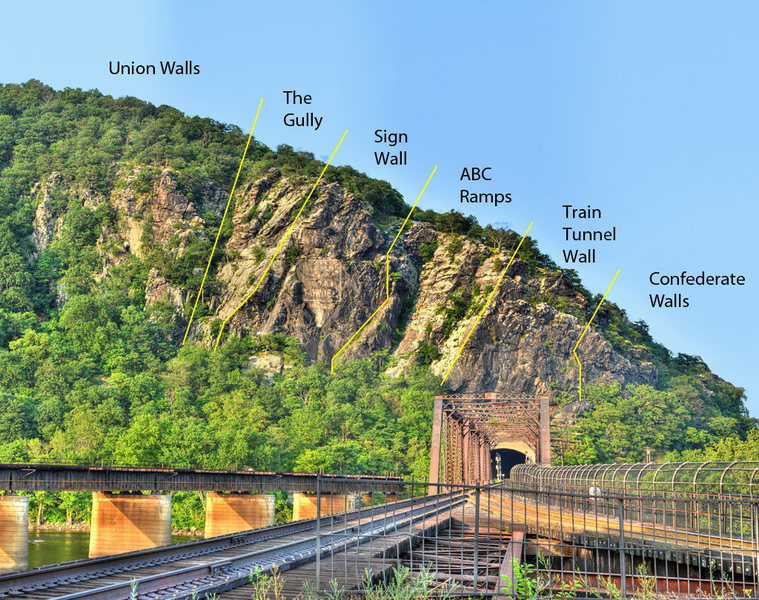 Seasonal Closures
As of March 4, 2016, Sign Wall and points right are closed for Falcons. Confederate Wall is open. Rangers claim Union Wall is also open, but there are signs along the approach trail indicating the trail area is also closed, so while the wall itself may be doable it'll require a different approach, from climber's far left. This closure is now expected yearly and normally ends in August. No closures expected for 2017. For further information check with Mid Atlantic Climbers.

Mandatory Sign in
To climb on Maryland Heights it is REQUIRED to sign in at the rangers information station its easy and doesnt take long. Not signing in may result in a $150 fee. This is the only cliff in the Harpers Ferry area that one needs to sign in for. The rangers often get reports from non-climbers that someone has climbed up onto the cliff and are in trouble. So by signing in the rangers know who should be on the cliff and who should not be. The rangers ask you to sing out however if its after hours 5:00pm and the station is closed there is no need to worry about it. Please do sign out to keep good relations with the park when possible. The rangers information station is located in the historical town in WV. The station is the last building on Shenandoah street (south side), near the intersection of High street. 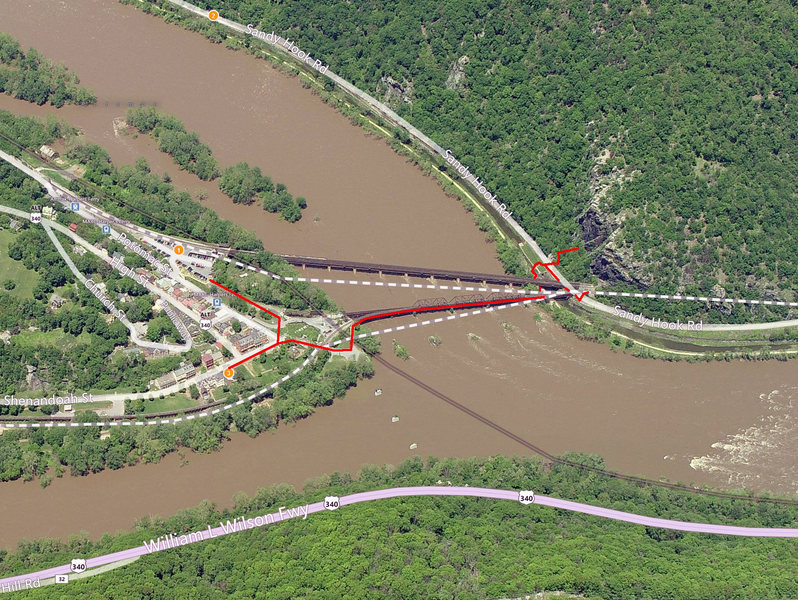 Rock quality
The Rock quality varies form excellent solid clean rock to broken and loose blocks with razor sharp edges. Most of the popular routes are fairly clean. The areas to avoid are above the sign particularly the top right section. Also The Union and Confederate Walls and the Gully seldom see climbers and will contain much loose rock, See Area Divisions Photo at the top.

Season
The Climbing Season is early spring to late fall, but seldom in the peak of summer. The rock faces South West so there is morning shade for most of the cliff. However the Train Tunnel wall and Confederate walls face south and will see the sun much earlier. Also the rock is mostly black and soaks up the solar heat making temperatures 10 degrees hotter then forecast. Harpers Ferry is notorious for chiggers in the summer time. So bring bug spray and spray your shoes and socks and dont sit down.

Parking around Harpers Ferry can be frustrating when arriving after 9:00am on beautiful days. The recommended parking lot is the CSX / Marc lot located off Potomac St in downtown Historical Harpers Ferry, see marker 1 on map below. This lot fills up quickly. The Fee is $10 or a year pass can be purchased at the visitor center for $30. From here it is a short walk to sign in at the ranges information station, see marker 3 on map below. Head across the train bridge on the pedestrian walk way to the cliff. At the bottom of the stairs for the bridge, walk under the railroad and go another 60 feet walk into the dry canal and mantle the wall on the other side from a stack of rocks. Cross Sandy Hook road to access the trails to the cliff. The trails to the climb Hard up and all the routes left of the train tunnel is located on the right side of the old white stone building at the base of cliff.

Alternative parking on the Maryland side is the trail head parking for the MD heights trail, see marker 2 on map. Located a half mile north from the cliff on Sandy Hook / Harpers Ferry Rd. However this lot only holds about 8 cars. If you arrive later in the day its possible to find a spot here particularly if you wait around for 15 minutes as someone may leave. There is a self pay box located 100 feet up the trail for Maryland Heights.

If everything mentioned above is filled up you will be forced to park at the visitor center and take the bus into town which also means you need to be out before 5:00 to catch the free bus back. 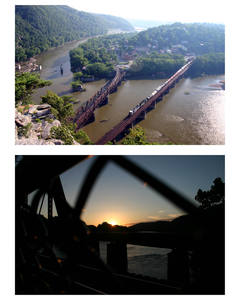 Approach the wall via the railroad tracks that… 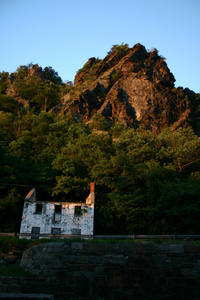 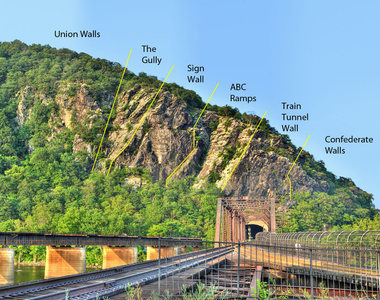 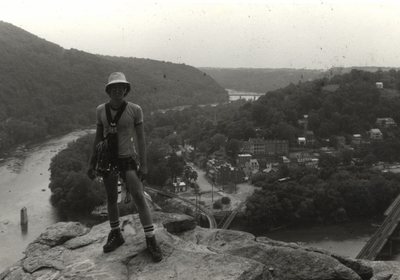 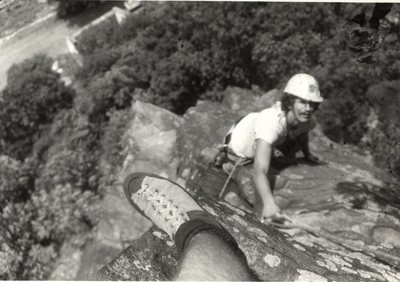 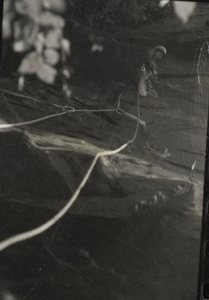 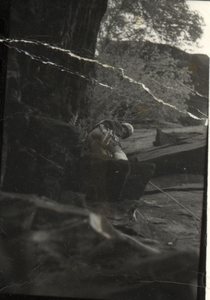 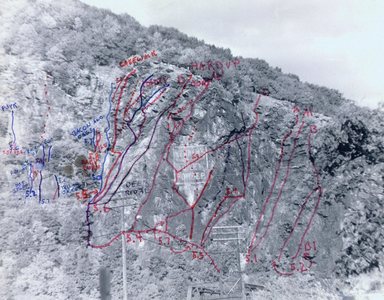 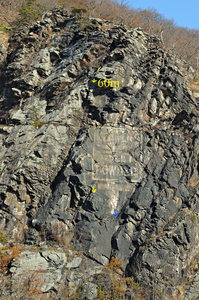 Yellow Arrows are the main Rappel A single 60m… 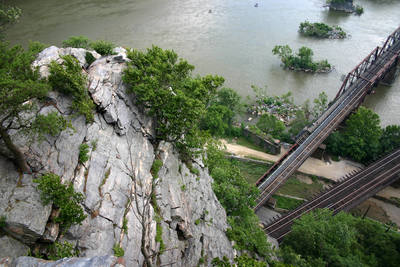 View of Maryland heights, looking down on a pop… 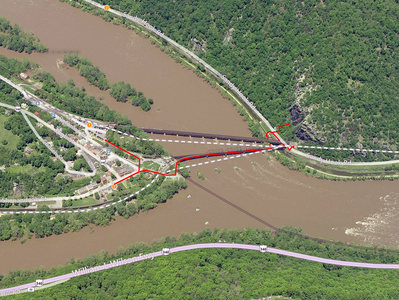 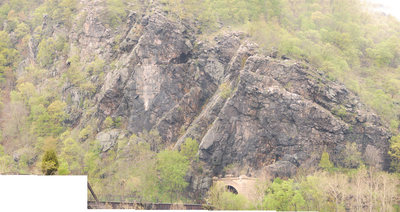 All Photos Within Maryland Heights, MD