If you can't tell from the route names Hotter than Hell, Inferno, and the like this is a very warm southern exposed cliff. On a summer day it can really live up to the route names...However in the late fall and sometimes winter you can have a pleasant day when the weather is way too cold for other crags....
You can recognize this section on the far left end of the cliff by the tree ledge splitting it at half height...Much like the one splitting the left end of Cathedral.
Must do, Hotter than Hell (5.9) to Inferno (5.8) CLASSIC! Also Atlantis (5.10b), Lost Souls (5.10a), Tranquility (5.10c) among other
great climbs....
The climbs are ordered Left-to-Right, where they are about 50 vertical feet up the slab. (See section "About Route Order") The short, 40-45ft climbs on Cathonian Slab have been moved to their own sub-area under South Buttress.

A long pretty trail curves through boulders to get you to the far end of the cliff for this area...Pick up the trail (hiking trail, yellow blazes) just after leaving the upper (the Hotel's) parking lot turn left follow it for a while as it descends past the first few tees of the golf course. If the trees permit, you will see the south buttress getting closer. The trail now starts to climb through the trees as it swings around the South Butress. After a short climb, the trail makes an abrupt 90-degree turn to the left, (There's a yellow "left elbow" blaze on a boulder.)  look for a small cairn that marks where the climber's trail branches off to the right. [If you get to a 15-20ft high, white boulder on the right side of the trail you've gone a bit too far, if you get to where the hiking trail actually descends slightly you've gone 100+/-yds too far.]  Take the climbers path, steeply, up to the base of Corinthian Slab and Hotter than Hell.  To get to the routes Atlantis and Inferno walk right along the base of Corinthian Slab and then scramble up it's left side...Have fun...

The Tranquility / Hotter-Than-Hell slab  and Atlantis area have many routes that start after you climb up 25 or 100 feet of another route. To make ordering routes even more complicated, many of these routes then cross either their original route, or other routes. Then there's a mid-cliff tree ledge where the "upper" section of routes can shift again, and of course there's one or two routes than ONLY have an upper section.
How does one order such a "mess" Left-to-Right?

First: "picture is worth a 100 words" , so there's a photo with routes on it. THIS IS FOR ORDER ONLY, please don't e-mail me with a correction that "route X" is 3 feet left of the OH while the line on the photo shows it going through the OH !

Second : I've chosen to order the climbs Left-to-Right about 50 vertical feet up the slab. As I say, many start (usually on Hotter-Than-Hell) and then branch left or right, but by about 50 feet up they form a reasonable order. The exception are the variations to Atlantis, which I put "under" Atlantis but clarified with info in the route's NAME.

If you add a climb, try to put it in where it would be relative to others about 50 ft up, or just leave it "unsorted" and put in a Page Improvement Request to order the climb.

For those climbs that have ONLY and upper section, you'll see "Mid-Cliff Start" in their names. 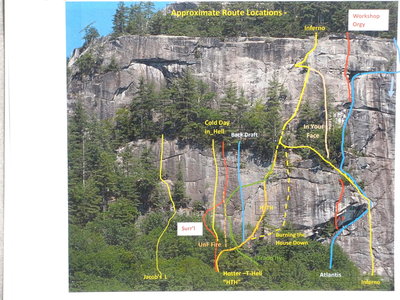 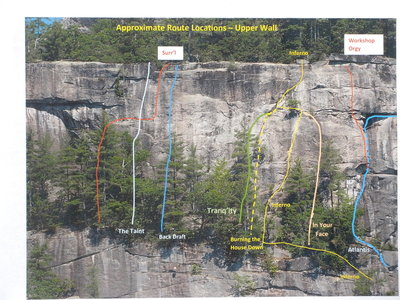 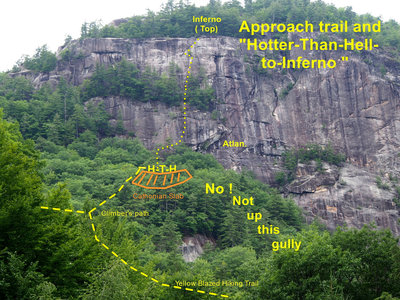 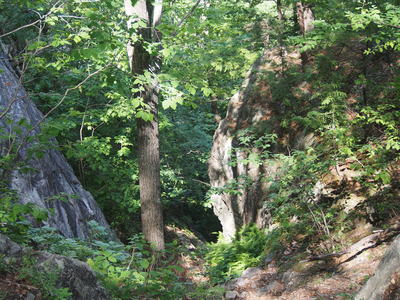 Looking down the Ugly Gully from the far right… 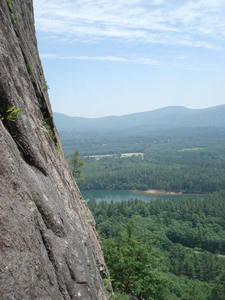 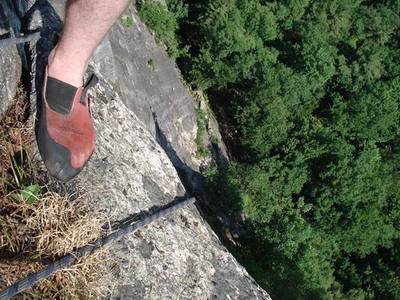 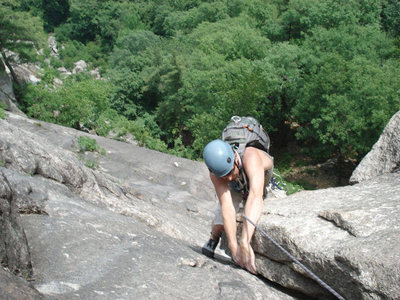 ernie "dad" hansche at the top of pitch one on…

All Photos Within Inferno - Atlantis Area