Strone Crag is the large, mostly north-facing wall between Challenge Buttress to the east and the Narcolepsy area to the west. As far as I can tell, at least up until 1979, when John Gottman published his guide Wasatch Quartzite, the crag was apparently known only as the "Standard Ridge," after the long moderate climb that catches the top of the cliff from its lowest point, across the talus field from the West Face of Challenge Buttress. (Standard Ridge, the route, is posted on a different page, as if it is a separate crag; I suggest that we use the name "Standard Ridge" to refer only to the route, and move it under Strone Crag, as its eastern- or left-most route.)

According to Stuart Ruckman, Dana Hauser gave Strone Crag its name, presumably around 1987, when Dana, along with Jim Hall and IME co-owner Scott Carson, put up Le Rap et Tap, one of the best 5.11s in BCC. Strone is Scottish Gaelic for nose, apparently in reference to the huge roofband in the center of the crag, bracketed by Wealth of Nations and Space Cadet on the left margin of the roofband, and Orbital Decay and Cat-O-Nine-Tails on the right margin.

Although a large part of the crag is not visually appealing, it actually climbs quite well, but it is BCC quartzite, so expect the climbing generally not to be continuous and to have some occasional, standard Cottonwood quartzite funk. Except maybe for those climbing mid-12 and above, it is well worth a visit for at least a half a day, regardless of your preferred grade, although pure sport climbers likely will be disappointed because many of the routes require at least a few cams. All routes can be descended with a single 60m, typically from chain anchors or Metolius rap anchors. A 70m rope is more convenient, however, to get off Kiss the Sky, Old Habits, Mad Calf, Cost of Business, Starstruck, Cersei, and Tyrion. For these routes, a 70m rope allows one to avoid a hanging rappel station (the hanging belay of Mad Calf) or an extra rappel (from the top of the first pitch of Cersei).

The approach is from Challenge Buttress. From the road, walk the well-trod Challenge Buttress trail to where it splits, then take the path to the right (the trail left goes to Challenge's East Face). After 40 or so feet, the trail splits again; stay to the right (going left leads to Challenge's North and West Faces). For all routes except Standard Ridge, continue along this trail for maybe 200 feet (passing a cool historic mining structure on the way) to the right (west) side of a scree and boulder gully, where a steeper trail can be gained that switchbacks up to the right (west) of the gully. The trail is easily followed from here, and soon reaches the right-end of the ledge system from which all the routes start except for Standard Ridge, and Itchy and Scratchy and its variations. (For Standard Ridge and Itchy and Scratchy, the approach is described on those routes' pages.) The start of the ledge system is usually marked by a cairn.

The approach described above may sound complicated, but it isn't; it'll take about ten minutes to get from the road to Starstruck, the first route encountered on the ledge system -- that is, unless you're a flatlander. There is a different description in the Ruckmans' guide, but that is outdated and the approach described here is far better. 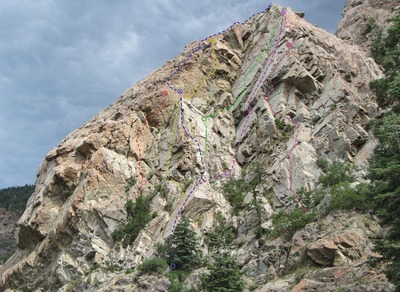 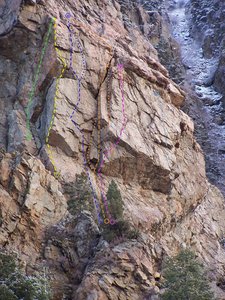 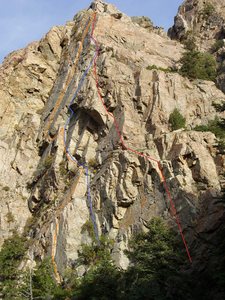 The northwest face of Strone Crag. Starstuck i… 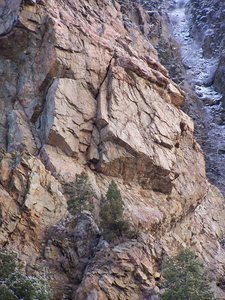 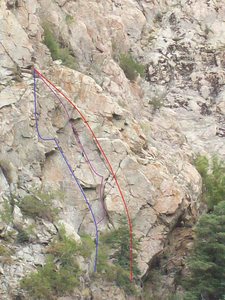 Far-right side of the northwest face of Strone… 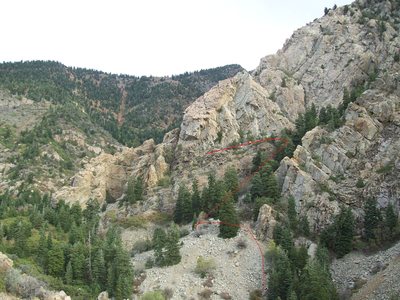 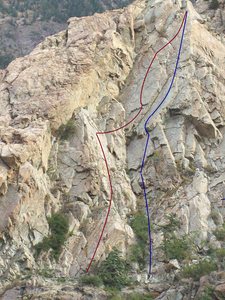 Another view of the Northwest Face, showing Kis…

All Photos Within Strone Crag