Routes in The Keel

The Keel is a long but thin ribbon of rock in the Flatirons between The Sphinx and Shanahan Crags. Rising up and left over 1000 feet of climbing and elevation but never taller than 120 feet tall, it does not command the same attention that rocks in the vicinity that have a larger surface area, such as 'The Slab' or 'The FatIron' command.
In fact, the lack of detailed documentation, the long hike in, obscure directions and remote location make this one of the least visited Flatirons in the entire range. And perhaps owing to that one of the wilder areas.

The long North Ridge of this lonely Flatiron rises West by Southwest for a very long time. I would say for approximately the same length as the more classic long routes in the Flatirons: The Direct East Face of the 1st, the East Face Left of the 3rd, Angel's Way in Skunk Canyon, etc....

The route is mostly good rock and is an excellent solo, owing to its low angle, choice of good holds, and opportunity for escape along various points of the rock (until near the summit).

There are many false summits along the way, some of which are possible to escape West from.

Once on top of this rock, the descent is to rappel from a fixed sling in a large tree growing up against the summit. If soloing with no rope, to down-climb this, but it is sketchy due to the small size of the dead branches that are on the last 30 feet to the ground- which you might need to use. I down-climbed this with a bear-hug and felt a little iffy.

The downclimb or rap from the summit of the Rock will place you at the foot of the North side of the 'Devil's Wings', perhaps 100m up and left of the low point. Continue up this rock for 700'+ more of good climbing on solid rock.

Approach from the Shanahan trailhead to the Mesa Trail, then south on the Mesa Trail to a flat meadow below Shanahan Crags and The Keel. Hike West by Southwest to the base of the Keel, perhaps 500 meters South by Southwest of the Shanahan Crags. This can be done by reaching Shanahan and then traversing over below the various other crags, but it seems it might be hard to see from this angle. Rather, we aimed for a talus field below and just East of the Keel, then went up and North to its base with it in view. Our approach stayed left (South) of several stratum and random rocks on the approach. Either way, this will take 40 minutes to an hour. 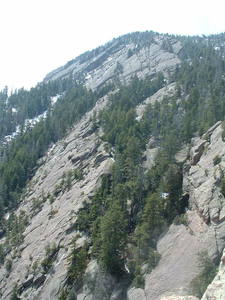 The Keel is the long flatiron on the left. The…

All Photos Within The Keel


More About The Keel