The Trapps is the largest and most popular cliff at the Gunks, with many excellent routes at all grades ranging from one to three pitches in height. Almost three miles in length, it is home to many classic climbs of all levels of difficulty, and sports almost 500 routes. It has many exceptional easy and moderate routes, and draws large crowds on weekends during the spring and fall.

The Grand Traverse Ledge (GT Ledge) starts halfway up the cliff near the route Easy Overhang, and runs north (right) with only minor breaks almost the entire length of the cliff.

A gravel carriage road runs the entire length of the cliff, and provides an easy walk below the cliff to get to your route of choice. Access trails, marked with yellow paint blazes, are used to get to the cliff from the carriage road in less than 5 minutes.

The hardest thing for new climbers to the Gunks is to find the correct access trail from the carriage road to a desired route. In summer, the cliff is obscured by trees, so it's often difficult to spot the routes from the carriage road. If in doubt, ask someone where to go; the locals are plentiful, friendly and helpful.

The cliff first rises tall above the carriage road at area known as the Uberfall. Mohonk Preserve rangers sometimes hang out here on weekends, checking to see if visitors have their passes. Water is sometimes available from a spring near the Uberfall, and a vault toilet is located nearby. There is a kiosk with a message board here as well.

To accommodate the 300+ routes of the Trapps, we've broken down the cliff into areas around well-known routes and walls, and divided them by easily-identifiable features. They are:

The Uberfall, including routes from the beginning of the cliff up to the vault toilet and kiosk below Boston
Jackie and friends, covering routes between the vault toilet and the huge left-facing chimney of Miss Bailey.
Frog's Head - the Arch, covering the Baby & Frog's Head, Drunkard's Delight, and Arch areas, to the major arete of Ribs.
Strictly - Shockley's, roughly between Ribs and the major corner system of Three Pines.
The Mac Wall (Something Interesting), from Three Pines to the huge orange right-facing corner of Asphodel.
The Guides' Wall (Madame G's) includes routes from Asphodel to the Mantle Block just left of Raunchy.
V3 - Middle Earth covers the Raunchy, V-3, Cakewalk, Middle Earth and Thin Slabs / Thin Slabs Direct clusters.
The Arrow Wall - CCK starts at the height of land near Red Pillar, past Arrow, Andrew, Moonlight, Cascading Crystal Kaleidoscope (CCK), and ends with Modern Times.
High E includes its namesake, Insuhlation, Ants' Line, and Bonnie's Roof, up to the huge cleft of Silly Chimney.
The Yellow Wall (Airy Aria) - The Seasons (The Spring) also covers the alcoves around around Ventre de Boeuf and The Sting, Double Crack, and the Seasons, ending with Blistered Toe.
The Slime Wall starts with the unmistakable crack of Last Frontier, covers Simple Suff to Wasp, and includes the Moondance area.
Sleepy Hollow covers the scattered routes and crags at end of the cliff.

There are two different ways of getting yourself to the carriage road. You can park at the Warwarsing lot, on your right just past the Mohonk Preserve Visitor's Center. Take the East Trapps Connector Trail, consisting of many stone steps and also known as "The Stairmaster", up the hill. This trail meets the carriage road at the Strictly / Shockley's access trail, which is about a quarter of the way down the cliff.

Or, continue driving up past the hairpin turn, up to the top of the hill, and pass under the steel bridge. The West Trapps parking area just downhill, on the right. From the far end of the parking lot, the West Trapps Connector trail will take you back to the carriage road, and you'll soon find yourself at the cliff, starting with a1. The Uberfall - left.

For mobile devices, check out the Gunks+ app, which has a guide to Trapps Routes and many more.

The Climber's Guide to the Shawangunks: The Trapps by Dick Williams, Vulgarian Press, 2004, is the definitive climbing guide to the Trapps. Often called the "gray Dick" because of its gray cover (previous Dicks were red, blue and black), this guide gives detailed info on all climbs and variations in the Trapps. Quality ratings, protection ratings, photos with route overlays, and line drawings showing the access trails make this an indispensible reference for the Trapps climber. Also included are sections on Gunks geology and climbing history. 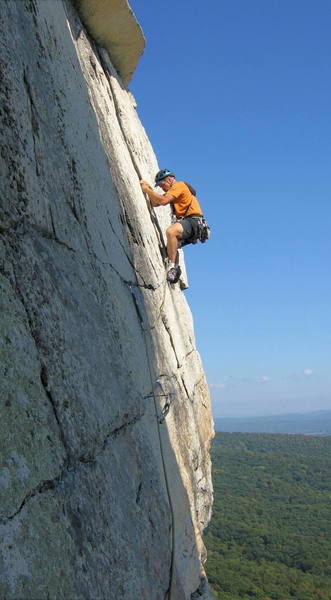 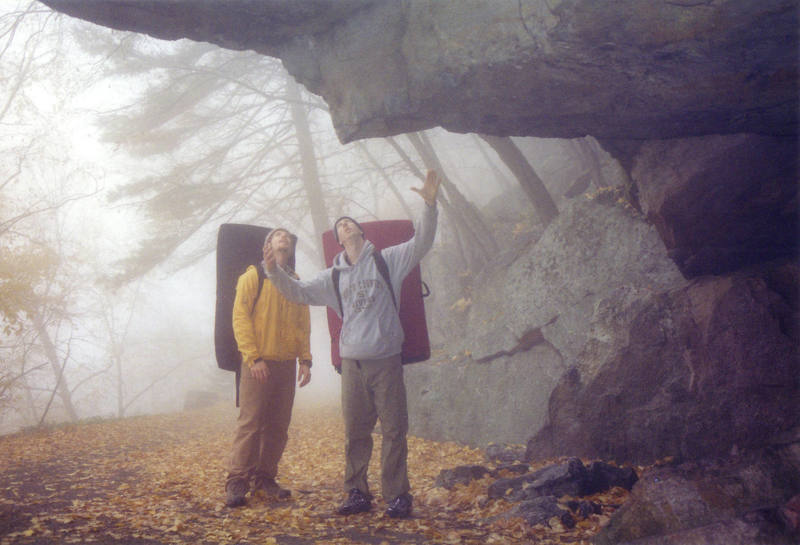 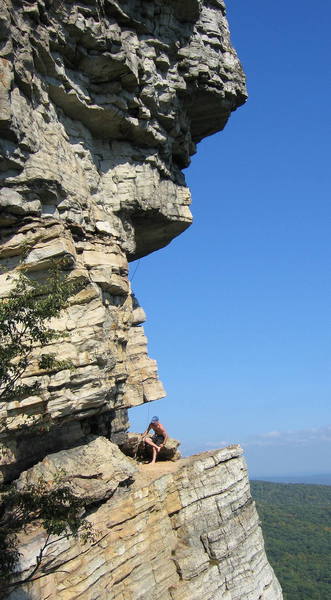 [Hide Photo] Climber preparing to start the exposed and exciting last pitch of High Exposure, one of the best 5.6 pitches on the planet. 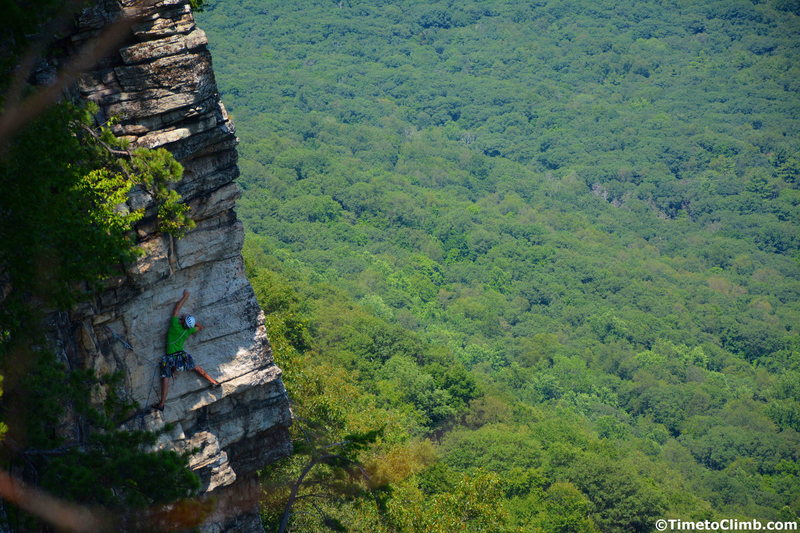 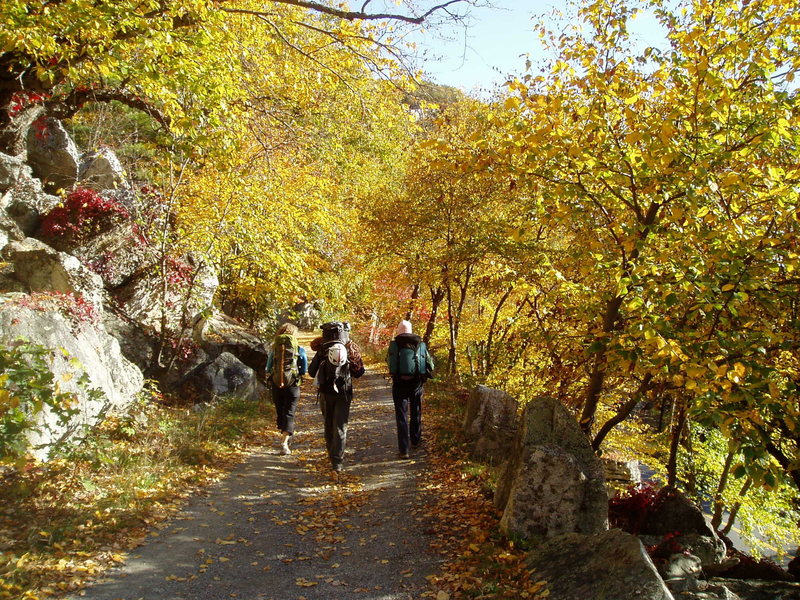 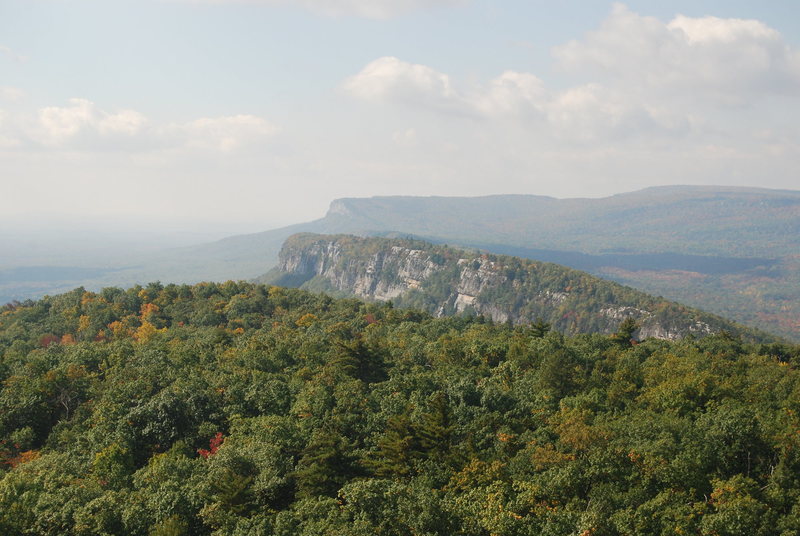 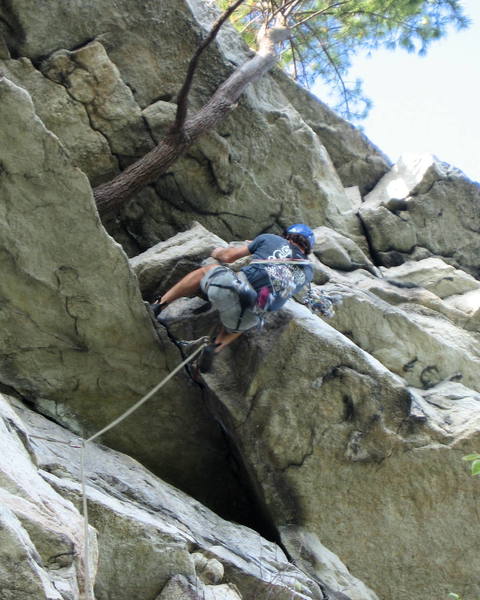 [Hide Photo] Mike Amato firing the wild crux of Modern Times. Can you believe this move is only rated 5.8+? 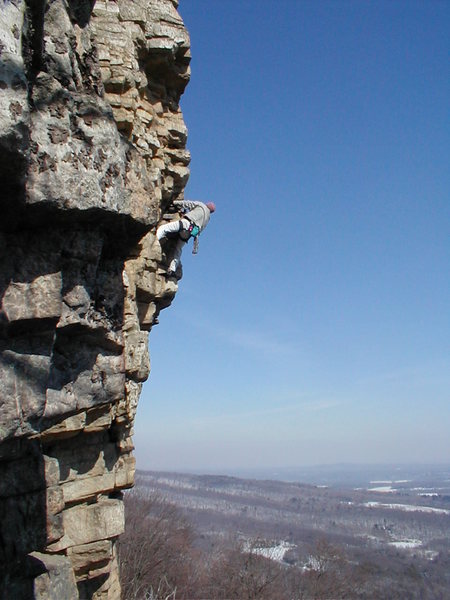 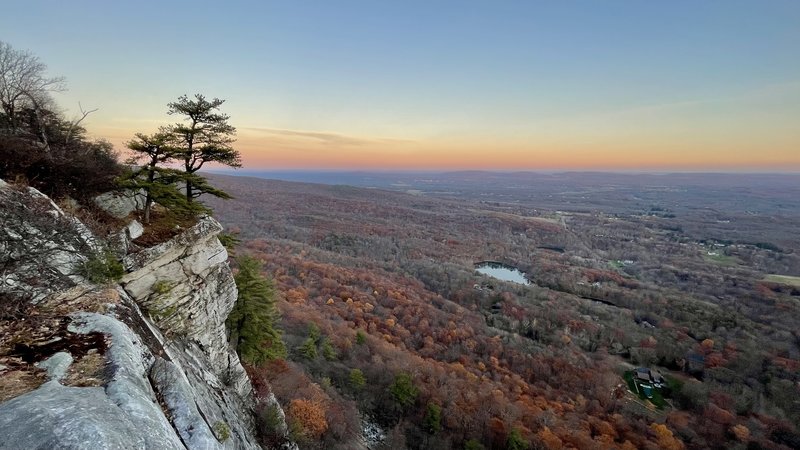 [Hide Photo] Catching a November sunset on the arrow wall 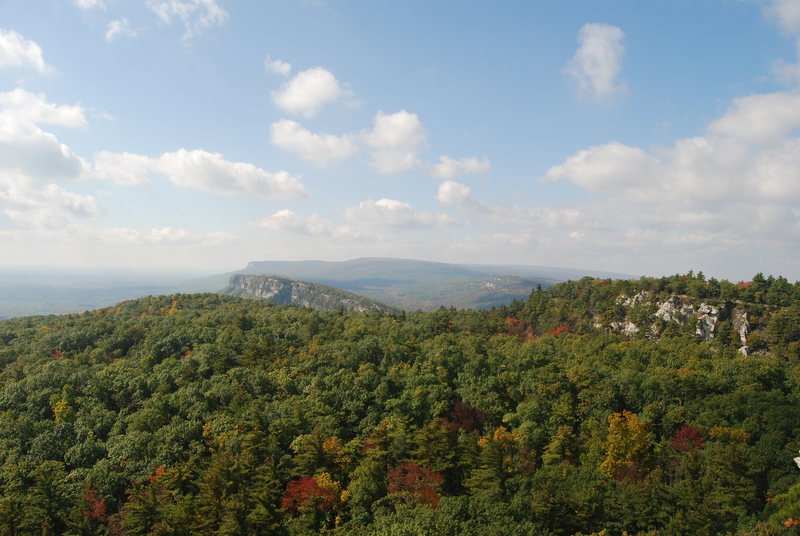 [Hide Photo] From Skytop towards Trapps.

[Hide Photo] The Trapps (most of 'em anyway) 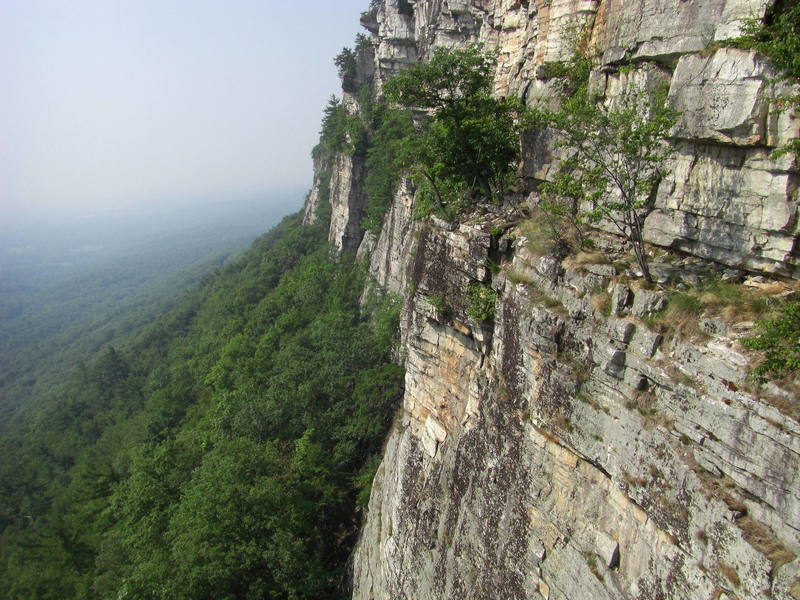