No access from the Turkey Rock Ranch Estates neighborhood.

Note: The GPS coordinates for this location as shown on the map will take you to the trailhead not the location of the main crag. To access the main crag, utilize the Approach to Turkey Rocks.

Turkey Tail is a great crag with some terrific lines. The difficulty level is a bit stiffer than most of the crags in the Turkey Rocks complex, so the seeker of the lower end difficulty routes might consider other crags in the area. Some of the routes include overhanging sections, so power can be useful here. This crag is to the right of Turkey Rock & Turkey Perch. Perhaps, the area classic is Whimsical Dreams.

For accurate directions to the approach to Turkey Rock, search for Turkey Rocks Trailhead. Do not park in or approach the crags from Turkey Rock Ranch Estates. There is no public parking, and the locals do not take this well.

The rap anchors at the top of Hummingbird Way have been removed. The only way down is a walk off. Here's the description per Ron Pivo: "the descent from the top of Snively’s, as well as all of the routes on Turkey Tail west of Turkey Turd is simple and easy. From the top of the route, drop into the chimney that splits the formation descending from east to west. An easy scramble down this chimney, headed west toward the Turkey Perch, leads to a short, vertical step facing north. A very easy 10’ hand crack is downclimbed (5.0) to a ledge and another large chimney to the west. This chimney looks scary to get into, but an easy passage is found by scrambling through a large gap just below the ledge. The chimney is not a downclimb, per se, but a sideways traverse west towards the Perch. When you emerge from the chimney, scramble up and right (north) to a short, easy downclimb that dumps you out near the base of Quivering Quill. Scramble down and around the Quill formation and back to the base of Turkey Tail. If you are capable of climbing any of the routes that go to the top of the Tail, you will have no difficulty doing this descent without a rope. For a party that is familiar with the route, the descent takes ten minutes or less. 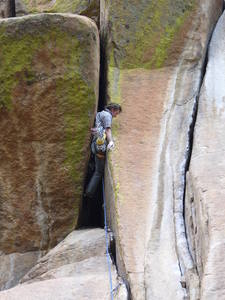 I am just about to fall out of Turkeys Only. 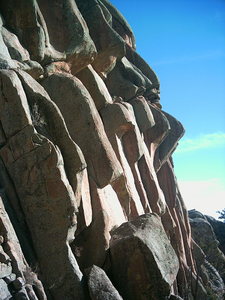 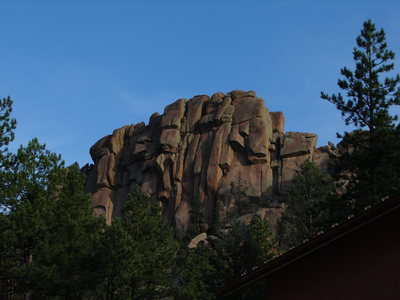 The tail (photo taken with permission). 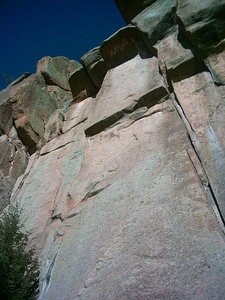 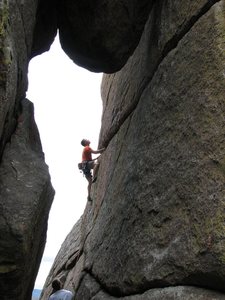 An unknown sport route in the corridor on the e… 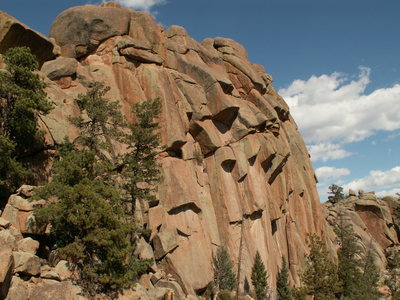 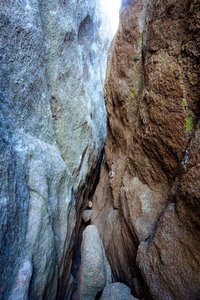 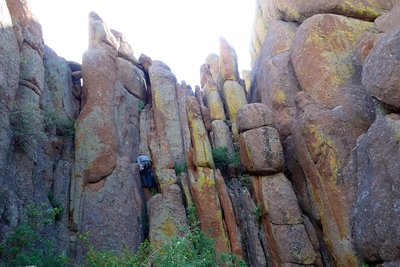 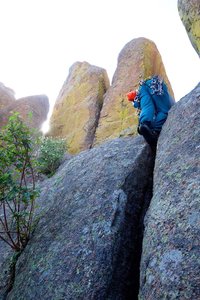 Descent beta: downclimb this handcrack to get t… 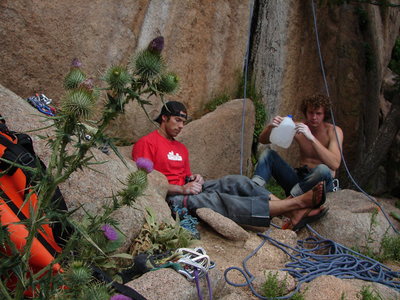 All Photos Within Turkey Tail