The Piz Badille is a large formation, some 500' from base to summit, which rises from just above the South St. Vrain River on the Peak-To-Peak Highway. Like a majority of the St Vrain Canyon formations, access is pretty easy right off the road. Unlike the majority, however, the Piz is located off Route 72, a few miles south of the Ironclads, not Route 7.

Named for its resemblance to the Piz Badille in the Alps, the rock was first climbed, and named, by Ray Northcutt in 1954, probably by the Ridge Route. The rock saw a resurgence of interest in the nineties when a number of bolt-protected routes were added to the lower slabs. There is still potential on the upper slabs for long moderate routes as most of the bolt protected routes end on the slab after only one pitch with miles of stone above.

The rock on the Piz is dark gray granite that is very variable in consistency. Most routes follow nice slabs split by intermittent cracks and overlaps, except the Ridge Route which follows a prominent ridge on the north of the formation. The rock quality can be quite good on the slab, but loose areas abound.

To descend from the Summit, scramble down the talus slope along the north edge of the mossy North face of the Piz. The more recent bolt routes have rappel anchors. Per Bill Duncan: there is now a double rope rappel near The Ridge finish.

To get to the Piz from Lyons, take Route 7 up the St. Vrain Canyon to the intersection with Route 72. Take a left (south) and after a few miles, the Piz will dominate the left side of the highway across the St Vrain River.

Access to the base of the Piz is very easy, that is, if you don't mind crossing a no trespassing sign. Park slightly north of the Piz at a turnout with a small bridge crossing the St Vrain River. There is currently a chain and _No Trespassing_ sign on this bridge. Cross at your own risk and head upstream to the base of the Piz. If your karma can't bear the thought of trespassing on the bridge, you can park slightly south of the Piz on Route 72 and cross the river at a shallow area. Expect this crossing to be the crux of your day! 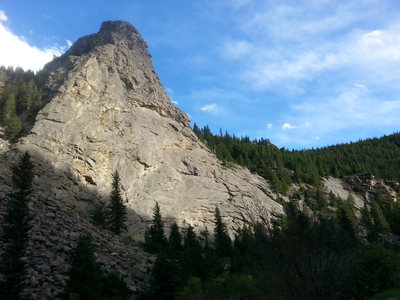 Late afternoon photo from the southwest. 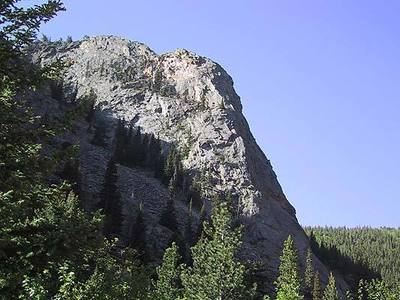 Piz Badille from the north, 8AM. 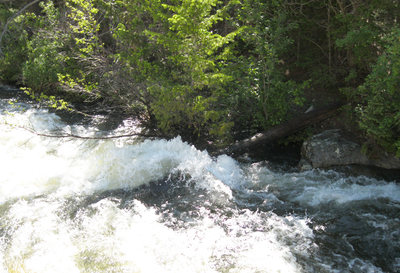 Even with the high runoff, we thought there was… 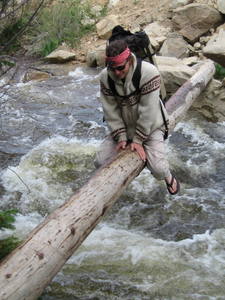 In my defense, I was pretty hung over, wearing…

All Photos Within Piz Badille