The "Skull Cave" is the massive cave on the East side of the canyon a bit downstream from Feline. This is a true cave, and all of the routes are completely sheltered from the rain, making this a popular hang in wet weather. However, despite the fact that no rain drop has ever touched these walls, most of the routes are often wet until mid-summer due to seepage. These lines have a rather nasty appearance, with corroded bolts, and covered in dirt and moss. Several of the once-classic lines have changed substantially over the years as the water has finally torn the choss loose.

There are a couple of worthwhile lines that are generally dry, and make for decent warmups. These lines are on the outer edges of the cave. Most of the routes going out the center of the cave are steep and hard (5.13).

Park downstream from the cave at a two car pullout or further down at a picknick area. Follow a trail at the "No Parking" sign up to the cave. This is the fifth crag on the right on the way into the park. Significantly large and deep, it is blocked from the road by a few trees.

Before climbers re-named it, the Skull Cave used to be named Old Maid's Kitchen, which is what the town locals still call it. Apparently an Old Maid of sorts used it as a kitchen to cook for some menfolk. Not much else is known.

If you think of the cave as Old Maid's Kitchen and choose not to climb here, you'll probably have a blast. If, however, you insist on seeing it as the "Skull Cave," then prepare to lock horns with a seeping, subpar climbing venue replete with sharp, barnacle-lipped pockets, oozing clumps of toxic moss and huecos filled with venomous spiders and various bits of nameless filth.

Just think of the Old Maid soloing this route in her cookin' shoes as you fumble desperately for a dirt-covered sloper at the lip of the cave and success will be yours! 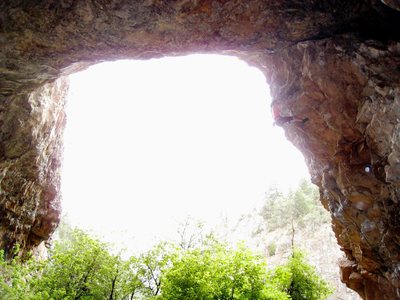 Driving Piles in the Skull Cave on a rainy day.

All Photos Within Skull Cave