Glenwood Canyon, a spectacular Colorado River cut canyon exposing varying layers of limestone and Precambrian granite, is home to numerous rock and ice climbing opportunities throughout the main canyon and numerous side canyons. Hard sport routes, multi-pitch trad lines, stomach turning aid routes, fat waterfall ice, and silly mixed masterpieces, Glenwood has it all. While much of the rock and ice is found on the south side of the Colorado River, making it more difficult to access, nearly every exit of I-70 offers a climbing opportunity.

The following areas are described from Glenwood Springs west to east: Directly out of Glenwood Springs on the south side of the river (only a short distance from the Brew Pub) are found the thermal hot pots and hobo vapor caves. A few trad lines ascend the limestone cliff, as well as fixed lines into the higher caves. Beware of dead hobos! On the north side of the river before the No Name tunnel, where the water tanks are located, is Cascade Creek. A few short moderate sport climbs can be found here, and opportunity awaits in the larger cave for sick bolted routes. On the opposite side of the ridge, or west side of the No Name Tunnel, is the limestone sport area known locally as the Puoux. Often mistakenly called No Name, the Puoux offers a large number of sport climbs from moderate (5.6-5.10) to sick (5.13d). Located above the Puoux proper in a prominent cirque is the newer Super Puoux sport crag.

No Name Canyon extends north from the No Name exit towards the Flat Tops wilderness. The No Name cragging is on both sides of No Name Creek less than a half mile from the Jess Weaver trailhead. A number of single pitch granite cracks offer a great day diversion. Further up No Name creek a number of crumbly granite buttress offer adventurous rock exploits. In cold winters a few small ice flows form as well. Heading east from No Name to Grizzly. Traveling north up Grizzly Creek one finds the east facing "Mud Wall", home to a few pug ugly "fraid" climbs. Layton Kor mentioned this wall in his classic book. As far as I know, no routes have topped out yet; an unknown party fixed a new line in the spring of 2003. Other walls of varying quality are found further north as well as a few short ice flows.

Opposite of Grizzly Creek on the south side of the river is the killer ice climb known as "Mystery Falls". Right at the Shoshone exit is a small granite outcrop offering a few short climbs. Directly across the river from Shoshone is the fabulous "Hidden Falls". This outlet of Deadman's Creek reliably offers sinker ice and, for those sick in the head types, rotten limestone. Between Shoshone and Hanging Lake is the vast majority of exposed granite in the canyon. The climbing here is on the south side of the river. During high water this makes it fairly inaccessible. Watch the dam at Hanging Lake. If it's open, get a boat or start swimming; if it's closed, hop across rocks (in a cold winter it is possible to cross the river ice). Many routes exist on these buttresses; the highest concentration is on the Fountain Buttress, Flag Buttress and the Hanging Lake Slab. The pronounced dark flat northeast face of the Fountain Buttress is home to the '60s test piece "Sucking Wind". For any route, bring a sense of adventure and extra slings (I'm sick of replacing them all). Also on the south side is the small estuary Devil's Hole Creek which offers the superb moderate ice climb "Ice Pole in the Devil's Hole". On the north side of things, a small pullout on the west bound lane shortly after Hanging Lake is home to the airy block. A few cracks and bolted routes offer some fun, but being right on I-70 detracts from the quality of the climbing. Directly above the Hanging Lake on ramp one finds the classic, though ethereal, Glenwood Falls. This ice (if it forms) falls into sunlight by ten o'clock, beware! To the right of the falls are a few mixed climbs across granite. Above and to the left of Glenwood Falls in the upper limestone is the modern mixed classic Deep Throat. Some very low angle ice (WI 1-2) does form up the Hanging Lake trail as well. Moving eastward from Hanging Lake one finds various layers of exposed limestone. While some traditional climbs have been done the rock generally is of poorer quality. A large buttress above the Bair Ranch rest area does look promising for sport development. One mile east of the rest area, a few sport routes exist on a limestone fin in a small slot on the North side of I-70.

A Colorado River cut canyon off of I-70, east of Glenwood Springs. It's kind of hard to miss....

See a bat on a route, give a shout. Climbers for Bat Conservation is working with climbers to understand bat ecology and why bats choose certain cracks and flakes. If you see bats, and want to tell them, here is their email (climbersforbats@colostate.edu) and their website (climbersforbats.colostate.edu/).

Climbers for Bat Conservation is a collaboration between climbers, bat biologists, and land managers to understand where bats roost and where large populations may reside. They are interested in finding bats because a new disease, called white-nose syndrome (whitenosesyndrome.org/), has killed millions of bats in North America. This collaboration has identified bat roosts throughout the U.S., and as far away as Norway and Bulgaria. CBC was developed by biologists who climb and they are advocates for climbing access and bat conservation. If you see bats while climbing, please let them know by emailing them at climbersforbats@colostate.edu, or visiting their website to learn more (climbersforbats.colostate.edu/). 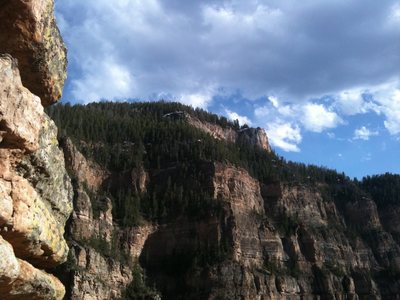 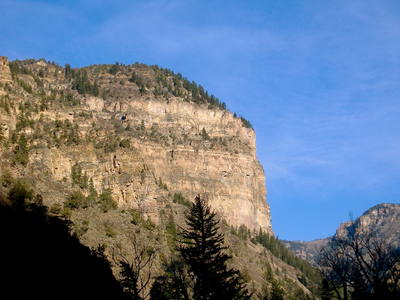 The Mudwall in Grizzly Creek.

All Photos Within Glenwood Canyon