This is the chunk of rock that presides of Camp San Luis Obispo as you head north on Highway 1 between SLO and Morro Bay. Many people might think that since the military has it, it's off limits. Not so!! Just call ahead [(805) 594-6510] to make sure they won't be target practicing and drive on in . . . the military folk are a bit confused by we climbers arriving, so don't be surprised if they act a bit confused about what to do with you.

But the rock! It's spectacular! Same kind of thing as Bishop Peak, but you're probably the only one out there, the approach is a bit longer and intuitive and what awaits you is the awesome wave rock formation. If you can climb hard, you are in paradise.

Be exceedingly nice to the folk you find on the base. They are keeping the access open as a service. No one says they have to make the rock available to the public.

Cerro Romauldo, 1306', is one of the Nine Sisters or the Morros (which include Morro Rock, Cabrillo Peak, Black Hill, Hollister Peak, Cerro Romauldo, Chumash Peak, Bishop Peak - 1559', San Luis Peak, and Ishlay Hill) that are a chain of volcanic mountains of San Luis Obispo County of Central California. The rock type is primarily dactite.

Drive north from Highway 101 on Highway 1 (the road from 101 is Santa Rosa, becomes Highway 1 as you drive out of town). As you come down the hill and around the bend, the large "Camp San Luis Obispo" signs are your clue to turn left onto the base. Tell the friendly men in uniform your intent and receive their directions. Don't mess around while you're there: it may be a reserve base, but those guys carry guns, doncha know. 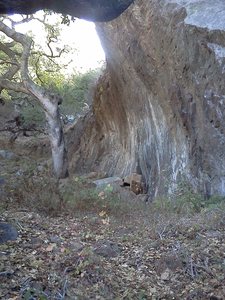 All Photos Within Cerro Romauldo