Located high above Santa Rosa lies a large park of rock known as Sugarloaf State Park. There's rock everywhere in this park. Unfourtunately, most of it is crummy volcanic rock that's too unstable for establishing routes. However, many of the tuff boulders in the park offer good bouldering on solid rock with very diverse ratings and problems.

This is one of the closest bouldering areas to The Bay Area, located just 15 minutes East of Santa Rosa, which is roughly a 50 minute drive from Central Bay locations. I drive like a bat out of hell on the 101, and can get there in 55 minutes, even being nice on Adobe Canyon Road.

There is now a fee to park at the Goodspeed trailhead.

Sugarloaf park is named so because of the packaging that sugar used to be sold in the 1900's looked a lot like the rolling hills found in the park .

Camping is allowed in the park at the designated campground which is easily found just before the day use lot. Top roping the cliff behind the parking lot is also an option.

There is lots of development potential at Sugarloaf, and it is a sight of some recent new problems. Potential first ascentionists should try to keep their routes facing away from established hiking trails so as to not detract from other peoples experiences while in the park.

From the Bay Area, head first to Santa Rosa via the 101 North.

Once into Santa Rosa, take the exit for highway 12, and continue on 12 East 11 miles to Adobe Canyon Road, where you should go left. Sugarloaf State Park is signed at this turn. 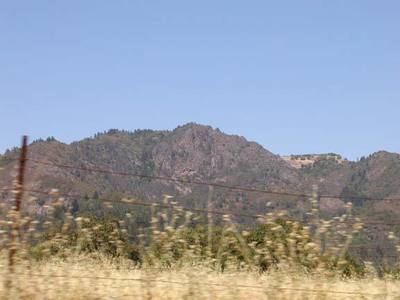 The view of some of Sugarloaf Ridge State Park…

All Photos Within Sugarloaf Ridge