Routes in The Minotaur

The Minotaur is a huge tower/buttress that stands up against the wall on the west side of the river on the canyon road. It can be found by looking at Angel's Landing from the bend/viewpoint on the canyon road. This tower is northwest of the spectacular Angel's Landing, between that wall proper and the more famous Moonlight Buttress. The Minotaur looks like a big spike in front of the wall proper and indeed has an independent summit.

The wall faces anywhere from southeast to northeast, depending on what side you climb on. This certainly gets a lot of summer sun, but on the short days of winter gets very little due to the shade cast by the Great White Throne at first, and then by Angel's Landing as the sun moves west.

There are two published routes on the wall, and certainly many others that we saw evidence of. All require aid as published. One route, The Megamahedral, goes free, although this is a serious undertaking. Due to the nature of the rock (soft), of the cracks (wide), and of the climbing (hard), any free climbing here should be considered "adventure climbing" or, as a pal put it, "old school trad." The topos for this feature are dubious in their accuracy. It's best to be solid at a full number grade above the reported grades here, as well as in most areas of Zion.

To descend from any route, reach the summit and rap via The MegaMahedral, which can be done with NOTHING LESS than two 60m ropes. If you want to reach the stations and ground with no scrambling and a little rope left, two 70m ropes are even better for the descent.

There are apparently two possible approaches:


The approach should take from 30 minutes to an hour.

Classic Climbing Routes at The Minotaur

Mountain Project's determination of the classic, most popular, highest rated climbing routes in this area.
More Classic Climbs in The Minotaur » 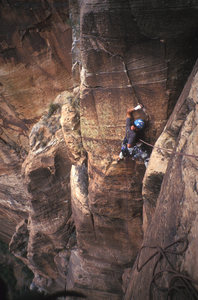 Martinelli on the Minotaur

All Photos Within The Minotaur


More About The Minotaur